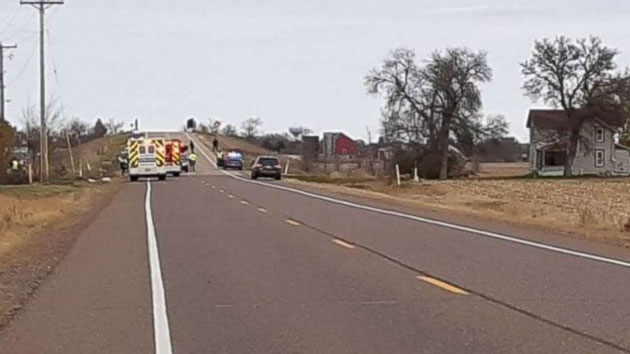 WAOW(CHIPPEWA FALLS, Wis.) — As a community mourned three Girl Scouts and an adult supervisor who were killed when a pickup truck struck them as they were picking up trash alongside a Wisconsin highway, the suspected driver was in custody Sunday on suspicion of being intoxicated when he allegedly ran them over, officials said.

The suspect, Colten Treu, 21, is expected to appear in court on Monday, officials said.

The names of those killed Saturday morning have not been released. Local residents were planning to hold a candlelight vigil for them Sunday night at Halmstad Elementary School in Chippewa Falls, where the three girls were all in the fourth grade.

A fourth Girl Scout struck by the truck remained in the hospital Sunday in critical condition, officials said.

The girls were picking up garbage at 11:41 a.m. on Saturday near the village of Lake Hallie, about 95 miles east of Minneapolis, Minnesota, when a Ford F150 pickup truck allegedly driven by Treu veered off a roadway and into the ditch striking the four girls and an adult who was overseeing their volunteer work, said Sgt. Daniel Sokup of the Lake Hallie Police Department.

It was not immediately clear whether Treu had retained an attorney.

The incident came at the end of a particularly deadly week for children hit by cars throughout the U.S.

In another deadly crash, three siblings died when they were hit by a pickup truck while boarding a bus in Rochester, Indiana, on Tuesday.

A 9-year-old boy was struck and killed while crossing the street to board a bus in northern Mississippi on Wednesday, and a second-grader in Pennsylvania was killed when struck by a vehicle at a bus stop on Thursday.

Five children and two adults were struck by a car at a bus stop in Tampa, Florida, on Thursday as well, though none of the injuries were considering life-threatening.