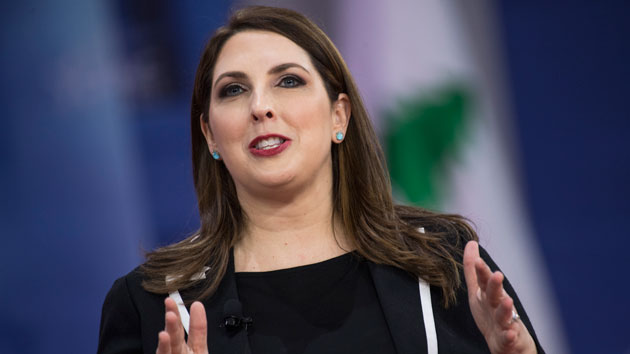 Tom Williams/CQ Roll Call/Getty Images(NEW YORK) — The Republican National Committee chairwoman said the midterm election contest that will determine control of the House and Senate is "tight," and the result will depend on who turns out to vote Tuesday.
Ronna McDaniel told ABC News Chief Anchor George Stephanopoulos on This Week Sunday that Democrats are demonstrating their enthusiasm for the election by voting early, but Republicans are "matching" it.
“It's tight, George, it's tight," McDaniel said. "It's going to depend on voter turnout on Election Day. Democrat enthusiasm is definitely there. We are seeing that in the early voting in all of these key House and Senate races, and Republicans have been matching, so literally Election Day voting is going to determine the balance of the House.”
McDaniel added that the fact that Republicans have a chance of keeping the House and a strong shot at holding control in the Senate means President Donald Trump could defy the historical trend of presidents seeing their party lose a significant number of seats in Congress in midterm elections.
"Obviously we have had headwinds with 44 retirements [of Republicans from the House] and the historical trends on the House, but I feel like we can still keep that majority and then in the Senate it's a better map, and if we keep the Senate that will be defying history as well because usually you lose three seats in that first term of a first-term president,” she said.
The Senate election map in 2018 favors Republicans because, of the 35 seats to be decided Tuesday, 26 are held by Democrats and nine by Republicans, meaning Democrats have to defend far more seats than the GOP. In addition, all but one of the seats Republicans are defending are in states won by Trump in 2016.
McDaniel said voters should choose Republicans based on the strength of the economy.
“The American voters are looking at what's happened over the past two years. They're making more money. More jobs are coming back. That is a great closing argument in a lot of these House races that are within the margin of error,” the Republican chairwoman said.
Stephanopoulos pressed McDaniel, noting that the president has been focusing his rallies, advertising and other rhetoric on immigration, not the economy.
“You say [the economy] is a great closing argument," Stephanopoulos asked. "How come the president is not making it?”
“He's talking about many different things that he's accomplished as president, because the list is so long," McDaniel responded. "I think he's highlighting the fact that we need immigration reform … But the economy is a driving force with the tax cuts and the deregulation. People's lives are better. They're taking home more money to spend on their lives, and that is a very compelling argument for many of these voters.”
Copyright © 2018, ABC Radio. All rights reserved.