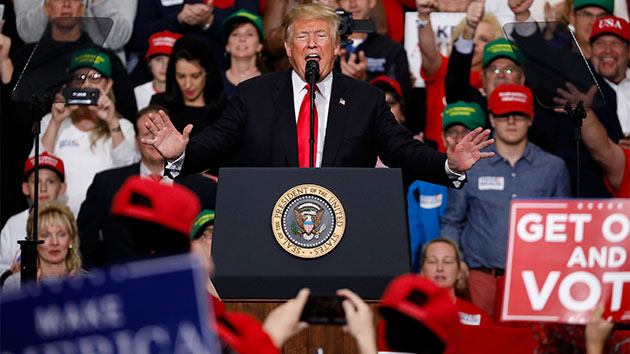 Aaron P. Bernstein/Getty Images(WASHINGTON) — President Trump, who has made Supreme Court Justice Brett Kavanaugh's confirmation process a rallying cry for supporters on the campaign trail, slammed a woman for making up an accusation against Kavanaugh during his investigation.

Yesterday, the Senate Judiciary Committee asked the Justice Department to investigate a woman who admitted she made claims against Brett Kavanaugh during the committee investigation as a "ploy."

The president responded on Twitter writing, "A vicious accuser of Justice Kavanough has just admitted that she was lying, her story was totally made up, or FAKE! Can you imagine if he didn’t become a Justice of the Supreme Court because of her disgusting False Statements. What about the others? Where are the Dems on this?"

The allegation made by a woman named Judy Munro-Leighton was not considered serious by Senate investigators and contrasts to the allegations made by Christine Blasey Ford and Deborah Ramirez, who were both interviewed by the FBI. Kavanaugh has denied the allegations of misconduct.

Sen. Chuck Grassley wrote in a letter to the Justice Department that Sen. Kamala Harris' office received an anonymous letter from a Jane Doe alleging rape. The committee questioned Kavanaugh on the allegation and read him the letter during the course of the investigation, Grassley writes. The committee then published a transcript of the interview, which included the letter's contents.

A woman named Munro- Leighton came forward and said she was the author of that Jane Doe letter. Grassley wrote, "Given her relatively unique name, Committee investigators were able to use open-source research to locate Ms. Munro-Leighton and determine that she: (1) is a left-wing activist; (2) is decades older than Judge Kavanaugh; and (3) lives in neither the Washington DC area nor California, but in Kentucky."

When the committee investigators reached Munro-Leighton by phone on November 1, the woman admitted she “just wanted to get attention," “it was a tactic," and "that was just a ploy" during the confirmation process.

"The Committee is grateful to citizens who come forward with relevant information in good faith, even if they are not one hundred percent sure about what they know," Grassley wrote.

"But when individuals intentionally mislead the Committee, they divert Committee resources during time-sensitive investigations and materially impede our work. Such acts are not only unfair; they are potentially illegal."

Grassley recently referred Michael Avenatti and Julie Swetnick to the Justice Department alleging they made "materially false" statements to the committee during their investigation.