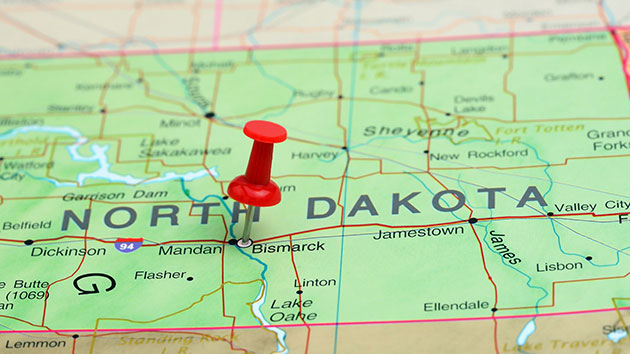 iStock/Thinkstock(BISMARCK, North Dakota) — After weeks of controversy over whether IDs Native American tribes have rushed to print will be accepted under North Dakota’s new voter ID law, the state’s top election official says he has an answer.
“Yes, they will be,” North Dakota Secretary of State Al Jaeger told ABC News. “[The IDs] can be in any fashion that [the tribes] want as long as what they provide has a name, date and residential address.”
However, questions remain just days before the state's pivotal and closely watched midterm election.
Jaeger said tribal IDs with new residential addresses would be accepted at the polls, but couldn't answer whether all the residential addresses would be considered valid — a concern of the tribes based on their experience with flaws in the state's system for determining addresses in rural areas.
He said it's up to tribes to make the determination of whether or not an address will be valid, and that from an election perspective, as long as a residential address appears on the ID presented, poll workers would “most likely” accept it as a valid ID to vote.
That response of "most likely" worries advocates such as Timothy Q. Purdon, a lawyer for the Spirit Lake Tribe, who told ABC News that because the tribe’s emergency motion was denied, he doesn’t know whether thousands of Native Americans who recently obtained new IDs will be able to vote on Tuesday.
“That was one of the questions our lawsuit sought to answer, and unfortunately we weren’t able to get an answer. I can’t say what will happen on Tuesday,” Purdon said.
Tribes in North Dakota have been working frantically to provide new IDs in time for Tuesday.
The new law, allowed to move forward by the U.S. Supreme Court earlier this month, now requires voters to provide IDs with a residential street address, which could potentially disenfranchise thousands of Native Americans who live on rural reservations where residential addresses are uncommon.
Estimates from North Dakota’s four largest tribes indicate at least 2,000 voters have been issued new IDs since the high court decision last month — a pivotal number in a state where the last Senate race went to Democratic Sen. Heidi Heitkamp by just under 3,000 votes. But tribal members are concerned that, despite the efforts, the new IDs could be denied at the polls.
That was one reason the Spirit Lake Tribe brought a lawsuit Tuesday against Jaeger, claiming that the implementation of the new law is “unplanned, untested and broken.” They filed an emergency motion to delay the residential address requirement until after the midterms, but their request was denied when a federal judge determined that a last-minute rule change would “create as much confusion as it will alleviate.”
Jaeger, however, sought to offer assurances that most voters who show up to the polls with new tribal issued IDs that show a residential address will "receive a ballot and be able to vote" either on a regular ballot or a “set-aside,” or provisional ballot.
Those voters would have three days to go to a county auditor’s office and confirm that they have a residential street address, considering weekend and holiday closures.
He added that those suing the state about the residential address issue should take their concerns to local officials, such as their county 911 coordinator.
“I would encourage those people to talk to local officials. They’re asking us to make determinations that we’re not in the position to determine,” Jaeger said.
Nevertheless, the systems for assigning and verifying residential addresses, which are at the heart of the lawsuit as potentially faulty, give qualified Native Americans reason for pause, according to tribal lawyers.
Spirit Lake’s lawsuit indicates that a tribal member spoke with a county 911 coordinator — as Jaeger recommended — and got an official residential address.
But her address was not considered valid in the state’s system.
Another tribal member was issued a state ID for an address in Oberon, North Dakota, but when a different resident of his same home called 911 coordinators to get an ID, she was given an address a few miles away in Fort Totten, North Dakota.
“Can you imagine how hard it is to live on a reservation, in some of the poorest communities, and then you face these sort of hurdles to exercise your right to vote?” Purdon told ABC News.
Despite the challenges, many in his community have become more motivated to cast their ballots.
“My friends who live on the reservations say they are undaunted," he said.
Copyright © 2018, ABC Radio. All rights reserved.