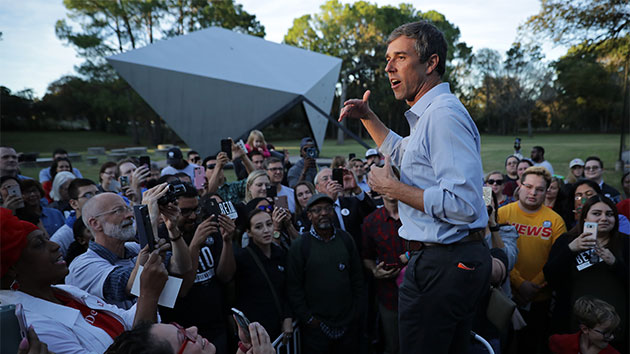 Chip Somodevilla/Getty Images(DALLAS) — With a mass shooting at a Pittsburgh synagogue still fresh in America’s memory, some of the nation’s leading gun control advocates took their campaigns this weekend to Texas, a deep-red state with the more registered guns than any U.S. state.

Student activists from Stoneman Douglas High School in Parkland, Florida and Santa Fe High School in Galveston County, Texas shared a stage with Gabby Giffords –the former Arizona congresswoman who survived a gunshot to the head during a mass shooting in 2011 — and her husband Mark Kelly, a former astronaut.

"We must do something — we must stop gun violence," Giffords said during back-to-back campaign events on Saturday for Democratic candidate Lizzie Pannill Fletcher in Texas' 7th congressional district.

"Do you have the courage to fight? Stand with me. Vote, vote, vote!" she said.

Giffords, who suffers from aphasia — a condition which impedes her communication skills due to damage from the shooting to the language passage on the left side of her brain – let her husband do much of the talking on the campaign trail.

"The answer is not more guns and this is coming from a gun owner," Kelly said during a Texas town hall forum which concluded the couple’s nationwide get-out-the-vote tour.

"Logically, that doesn't make sense," Kelly said. "If the answer was more guns, we would already live in the safest country on the planet, because of the number of firearms that are here and the number of people that already carry them."

"It does not pass the logic test," Kelly added.

Kelly touched on the aftermath of the Pittsburgh Synagogue shooting that claimed the lives of 11 victims, one including a 97-year-old woman and the president's response to the massacre.

"Arming the security guard wouldn't have stopped anything," Kelly said.

Giffords and Kelly were joined by high school student activists.

"November 6 is not the deadline,” said David Hoggs, a survivor of the mass shooting in Parkland in February that killed 17 students and staffers. “It's the start of a revolution.”

“I'm ready to see this country be what it says it is on paper."

Mcguire told the crowd she was too young to vote, but encouraged them to vote on her behalf.

"Beto sat down with a note pad and pen and paper and asked how we felt," Mcguire said of O’Rourke. "He promised us he would change how things are happening. That was really important to me."

According to a 2016 report by the U.S. Department of Justice Bureau of Alcohol, Tobacco, Firearms and Explosives, Texas had the most registered guns in the country.