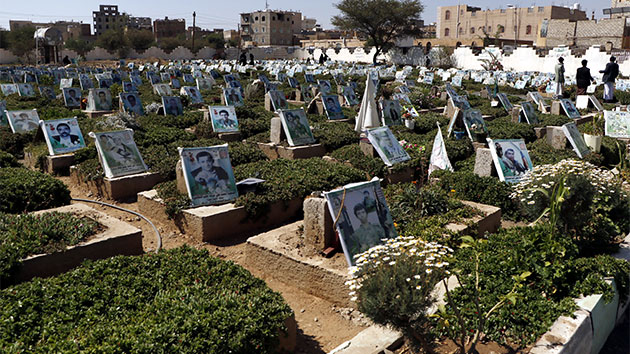 Mohammed Hamoud/Getty Images(LONDON) — Amid a new push to finally end the war in Yemen, the United Kingdom is planning to introduce a United Nations Security Council resolution to support that effort, according to a Security Council diplomat and two sources familiar with discussions.

Days after the Trump administration announced a 30-day deadline to reach a ceasefire, it's another sign that after nearly four years of devastating fighting, food shortages and starvation, and disease, there is a real push underway by Western powers to bring the conflict to an end following years of support for Saudi Arabia and the United Arab Emirates' fight against Houthi rebels.

One source familiar with discussions said that the U.K. and the U.S. are serious about working toward this new push for peace, and that the British could introduce the resolution as soon as next week.

It's unclear what specifically the resolution would require, but one source said it would call for a humanitarian ceasefire and the safe passage of food and other aid, for support for the cratering Yemeni economy, and on both sides to fully engage with the U.N. Special Envoy for Yemen Martin Griffiths.

The war between the Houthis, supported by Iran, and the Yemeni government, boosted by U.S. allies Saudi Arabia and the UAE, has killed at least 16,200 civilians, sparked a deadly cholera outbreak, and now brought 14 million people to the brink of famine, according to the United Nations.

There may have been a breakthrough this week, however, when the U.S. called for a ceasefire within 30 days and all parties to come to the next round of U.N. peace talks.

But there is some concern the new demands could be pushing for too much too quickly.

Two sources said Special Envoy Griffiths has expressed doubts about how helpful a new resolution is or whether it could be an obstacle by demanding unrealistic conditions like a complete cessation of hostilities. In an interview Friday, he hinted at that reservation himself, telling CNN, "I don't want to see us getting stuck on things that are difficult to put together… A nationwide ceasefire is obviously a wonderful and marvelous thing… but I don't want to make that the precondition for consultations and talks, which we hope to hold later this month."

The U.N. does already have a resolution in place from April 2015 that demands "all parties in the embattled country, in particular the Houthis, immediately and unconditionally end violence." Some believe an additional resolution is unnecessary.

In fact, the U.K. Minister of State for the Middle East Alistair Burt told Parliament on Tuesday, "Passing a ceasefire resolution risks undercutting the U.N. envoy's efforts to reach a political deal and undermining the credibility of the Council."

"As soon as the right opportunity arises, we will bring forward a resolution," he added.

That opportunity may have come hours later when the Trump administration announced a shift in its policy — what the president of the International Rescue Committee called "the most significant breakthrough in the war in Yemen in four years."

While both sides in the nearly four-year-old war have been accused of war crimes, the Saudi-led coalition has been accused of indiscriminately bombing civilians and even targeting civilian infrastructure to exacerbate the humanitarian toll. Still, the Obama and now Trump administrations in the U.S. have supported the coalition militarily with mid-air refueling for warplanes, conducting reconnaissance, and providing training.

That support shifted, at least slightly, on Tuesday, when Defense Secretary James Mattis and Secretary of State Mike Pompeo called for an immediate end to hostilities in back-to-back statements. Mattis said the U.S. wanted to see the parties "around a peace table based on a ceasefire, based on a pullback from the border and then ceasing dropping of bombs" within 30 days.

Pompeo echoed that in a statement two hours later, calling for the Houthis to first stop threatening Saudi Arabia and the UAE and then those two countries to halt their airstrike campaign.