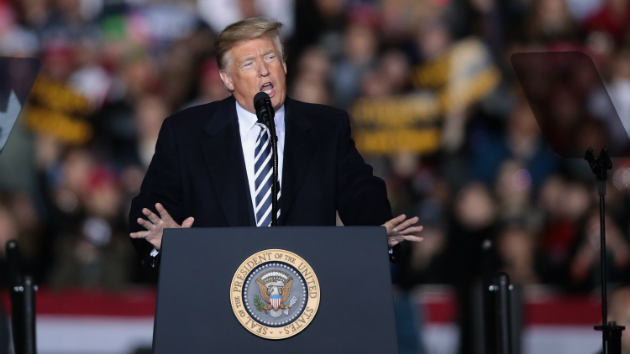 Scott Olson/Getty Images(COLUMBIA, Mo.) — At a rally in Missouri Thursday night, President Trump blamed the recent pipe bombings and synagogue massacre for slowing down the Republican momentum leading up to the midterm election on Nov. 6.
Trump took his final week midterm blitz to the heartland Thursday, appearing in a hangar of the Columbia airport to stump for the state's Attorney General Josh Hawley in his race against Sen. Claire McCaskill.
In reflecting on the upcoming midterms, the president lamented that the news coverage of the attempted pipe bombings and the synagogue massacre slowed Republicans’ momentum.
"We did have two maniacs stop a momentum that was incredible," Trump said.
In line with Trump's recent attack lines leading up to Election Day, the president repeatedly came back to the issue of immigration, offering vivid and sometimes violent accounts of crimes he says were committed by undocumented immigrants, as he urged the crowd to vote Republican to prevent the country from being "overrun."
The crowd appeared energized as the president took aim at the migrant caravans filled with what he described as "tough people" marching towards the southern border.
"These are tough people, these are not angels, these are not little angels," Trump said. "And we’re not letting them into our country."
Trump again seemed to float the conspiracy theory that the caravan was only formed because "somebody was involved, not on our side of the ledger."
"Does anybody think that’s by accident that they were forming?" Trump said. "You know I think what happened? You know I really believe that somebody is involved, somebody that’s not on our side of the ledger. Somebody is involved and somebody else told him you have made a big mistake."
He later recalled a TV interview which he claims he watched in the past couple days where a member of the caravan was interviewed and supposedly said that she had committed "murder." It wasn’t immediately clear what the president was referring to, but the image was reminiscent of the racially charged campaign ad posted to his Twitter Wednesday.
"This is one of the people in the caravan, can you believe what is going on in this country?" Trump asked.
The president continued floating conspiracy theories as he launched into an attack on birthright citizenship, which he described as "a crazy, lunatic policy," saying Democrats are "openly encouraging millions of illegal aliens" to break into the U.S. for "free welfare, free education, free health care and of course the right to vote."
"If you want your children to have a country, vote Republican — you won’t have a country!" Trump said. "If you don't want America to be overrun by masses of illegal aliens and giant caravans you better vote Republican."
In setting his focus on the tight race in Missouri, the president attacked Sen. McCaskill, labeling her as a phony for her recent messaging in which she has sought to frame herself as a moderate on issues like immigration.
"She’s been saying such nice things about me but you know what, she’ll never vote with me," Trump said.
After inviting Hawley onstage, the president attacked McCaskill again before assuring the crowd that Republicans would always guarantee the protection of coverage for pre-existing conditions, an issue McCaskill has repeatedly sought to highlight in her fight against Hawley, one of the plaintiffs in the Republican attorney general's lawsuit against the Affordable Care Act.
In highlighting his work on North Korea, Trump announced that he spoke with Chinese President Xi Jinping earlier in the day about trade, and previewed "lots of great things" on that front "over the next short period of time."
Trump returns to Missouri next Monday with a rally in Cape Girardeau.
Copyright © 2018, ABC Radio. All rights reserved.