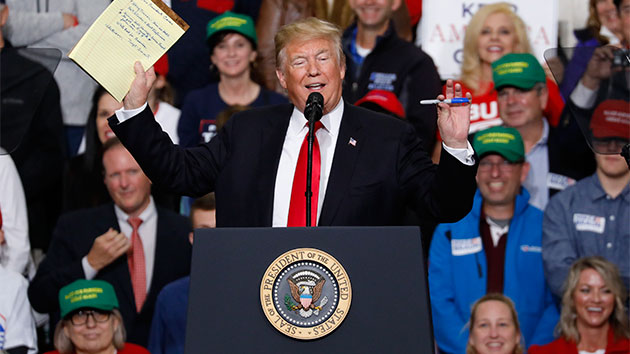 Aaron P. Bernstein/Getty Images(WASHINGTON) — In an airport hangar high in the hills of Huntington, West Virginia, President Donald Trump on Friday made his closing argument for Republicans running in the midterm elections.

But in a state he won handily in 2016, and before a crowd more subdued than usual, the president appeared to admit for the first time that Republicans might lose control of the House of Representatives.

The president was stumping for Attorney General Patrick Morrisey's Senate bid and Carol Miller's run for the House of Representatives. Both are in close — and at times nasty — races against Democrats Richard Ojeda and incumbent Sen. Joe Manchin.

Trump won the Mountain State by an overwhelming percent of the vote in the presidential election — a fact the president was eager to share with the crowd.

"You know what that's like — did anyone ever hear of 42 points?" Trump said, reminding the audience of the large margin by which he won against Hillary Clinton.

The Trump mocked political prognostications of a "blue wave" in 2018.

But he added: "I'm not saying they're not going to squeak by," Trump said.

The president said, while aboard Air Force One, he had watched former President Barack Obama's campaign appearance for Democrats in Florida, but claimed Obama had a "small crowd."

"I was in the plane, I have nothing else to do, I heard him talk about telling the truth," Trump said, "And yet, he said you can keep your doctor if you like," in a reference to Obamacare.

On a day when the president could be talking about the economy, he focused on immigration, Kavanaugh, coal, and health care — a hot topic in the Mountain State.

In a mostly rural, Appalachian state thousands of miles away from the Southern border, Trump got the crowd riled up over immigration.

"Do we let them in?" Trump asked, to which the crowd yelled an answer: "Build the wall!"

The president went on to tell the crowd, without evidence, that the caravans from Central America are bringing in people with criminal records. He appeared to defend his controversial and racially-charged campaign ad posted on Twitter about an illegal immigrant who killed two California law enforcement officers.

"I put it up on Twitter and they gave me a hard time. They said you shouldn't be doing that, that's not nice. And I say all I'm doing is just telling the truth," Trump said.

The president called out Manchin for his last-minute vote to confirm Brett Kavanaugh to the Supreme Court. The president said he spoke to Manchin on the phone about his vote days before the confirmation votes and the Manchin said he would think about casting a key vote for Kavanaugh.

The president claimed again that Republicans are for keeping pre-existing conditions — an issue that has become a hot-button campaign issue in West Virginia because Morrissey joined 19 other state attorneys general in a lawsuit to try to end Obamacare and potentially take away protections for pre-existing conditions.

"We had Obamacare killed except for one Republican vote," Trump said, in a jab at the late Sen. John McCain.