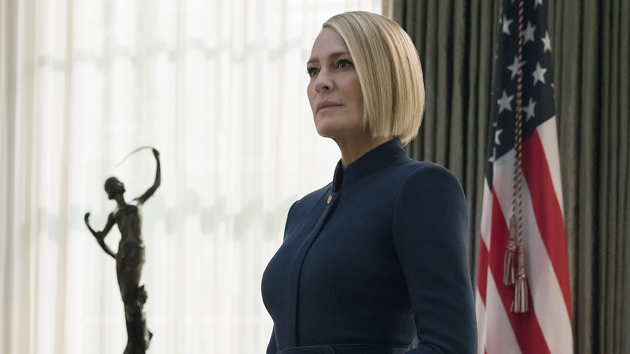 David Giesbrecht/Netflix(LOS ANGELES) — House of Cards' sixth and final season debuted on Netflix overnight — and it's truly the end of an era. The show put Netflix on the map for original content, and its stars, Robin Wright and Michael Kelly, tell ABC Radio they're proud to have been a part of the revolutionary TV series.

The series suffered a major blow with Kevin Spacey's firing from the show amid sexual misconduct allegations, and the 52-year-old actress admits that for a while, she wasn't sure if it was coming back.

"We had many many discussions and…collectively decided that it was better to complete the season, for the fans, and predominately for the employers, the people who make the show. We would have been putting over 600 people out of a job," she explains.

When the House of Cards launched in 2013, it seemed like an exaggerated version of the craziness of politics and Washington D.C. However, fast forward several years, and star Kelly, 49, tells ABC that dynamic has flipped.

"I just don't know how you get much crazier than, than what's happening in real life, he notes. "I always say, the one thing about House of Cards is that these characters do these things, and there are zero repercussions in real life. That cannot be said about what happens in real life. There's consequences to your actions, whereas we're just playing. We're make believe."

While the show may be gone after this season, Wright kept one memento so she'll always remember her character, Claire Underwood.

"I took a pair of her Louboutin heels," she admits.