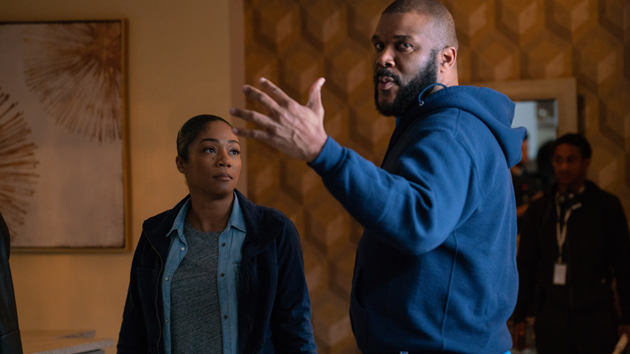 The film follows a recently-paroled Tiffany Haddish, who tries to help her sister — played by Tika Sumpter — get revenge on the man who might be catfishing her. While the rom-com will undoubtedly make viewers laugh, Perry tells ABC Radio he also believes it will make people think.

"Well, she makes a list of what she wants in a man, right?" Perry says, referring to Sumpter's character, who's on a search to find Mr. Right. "And she makes this impossible list and when she thinks she's has everything on the list she realizes, 'Oh, wait.'"

He continues, "And, so the message for me is everybody is imperfect. And stop trying to make people perfect… In life, you only get to get about 80 percent of what you're looking for in a spouse or a person. If you get to 80, you win."

While Perry hopes fans will find the deeper meaning in his R-rated comedy, he already has one exceptional fan cheering him on for his current accomplishments, which includes owning his own movie studio.

Goldberg continues, "This is [the] first…[black studio owner] with the the exception [of] I think… Oscar Micheaux. But he never had a studio like this."

The “snot”-so-fun joys of parenthood, according to Katy Perry and Orlando Bloom
Treat yo self! Aziz Ansari reveals engagement during comedy set
50 Cent shares how he convinced Eminem to play White Boy Rick on Sunday’s episode of ‘BMF’
Fortune Feimster on comedy lately, and love springing from the set of ‘Chelsea Lately’
‘Eternals﻿’ star Don Lee on the “very important message” of the film
Tyler Perry says he’s ready to “relinquish” some of his creative control over his series