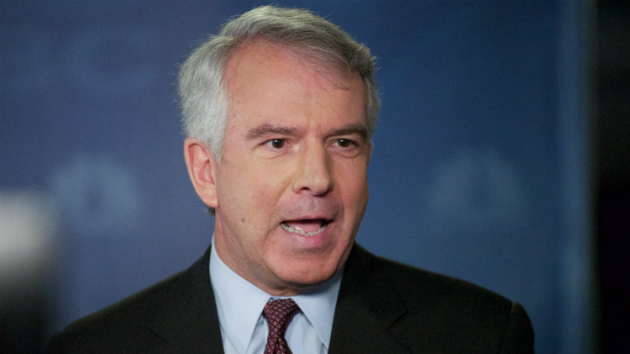 Mark Neuling/CNBC/NBCU Photo Bank via Getty Images(JACKSON, N.J.) — No Republican has won election to the U.S. Senate from New Jersey in 46 years.
That fact was repeated several times during an event at a local Republican Party office in Jackson, New Jersey Thursday night. But no Republican previously had the opportunity to run against Bob Menendez less than a year after he faced federal bribery charges either.
The story of the 2018 New Jersey Senate race is a story about Menendez's alleged misdeeds and the shadow they've cast over his re-electability, but the man who stands to benefit — and, given the narrowing of some polls in recent months, already has — is pharmaceutical executive Bob Hugin, the Republican candidate who has parlayed a moderate platform and unforgiving attacks on his opponent's ethics into one of the most surprisingly competitive campaigns in the country.
"The current senator has failed and embarrassed us," Hugin told ABC News, after delivering a get-out-the-vote message to the partisan crowd. "Listen, the guy violated federal law, abused the power of his office, disgraced the Senate."
Indicted and tried alongside a Florida ophthalmologist, who was a close friend, on charges that included conspiracy and bribery, federal prosecutors claimed Menendez received gifts and favors, including flights on a private jet and lavish vacations and political contributions, in exchange for advancing the doctor's personal policy interests, among other forms of assistance. But the case ended last November in a mistrial and the government dropped the charges after declining to pursue an additional trial.
"To those who were digging my political grave so that they could jump into my seat, I know who you are and I won't forget you," Menendez warned publicly after the mistrial was declared, eliciting unkind comparisons to a New Jersey mafia boss from across the political spectrum, and perhaps swaying public opinion in advance of his eventual campaign.
Despite Menendez dodging a conviction, Hugin, a former Marine who made millions as the executive chair of the biopharmaceutical company Celgene, has seized on the charges in the final weeks of his campaign, arguing that the senator lacks the ethical standing to represent the state, one that's already the butt of jokes about political corruption after years of misdeeds from its politicians in Washington, the state capital, Trenton and its cities big and small.
Though New Jersey largely turned away from President Donald Trump in the 2016 presidential election, preferring Hillary Clinton by more than 14 points — not a surprise after sending its electors to Democrats in the six preceding presidential contests — there's a underlying kinship in Trump's penchant for bluntness and the Garden Staters' affinity for speaking what's on their minds. Many political observers credit former New Jersey Gov. Chris Christie's infamous town halls, which often devolved into shouting matches, for paving the way for Trump.
And when Hugin and his campaign address the Menendez scandals, it's impossible not to see the effect Trump has had on political discourse.
"For several years, Senator Menendez had been traveling to the Dominican Republic to engage in sexual activity with prostitutes — some of whom were minors, even as young as 16," says a narrator in one of Hugin's television advertisements, quoting, in part, from an unsubstantiated FBI affidavit that originated from an anonymous tip. Menendez has steadfastly denied the charge.
The attacks are a substantial shift in tone from when Hugin discusses policy and his personal path to the nomination, reflective of the difficult balancing act of appeasing the state's right wing, which embraces the president in a fashion no different than the rest of his base across the country, and the socially liberal moderates who occupy many of the state's many affluent and well-educated suburbs. Though Democrats hold a substantial party-affiliation advantage in the state, it's these voters who have vaulted the likes of Christie and fellow former Republican Gov. Christine Todd Whitman to statewide victories.
Hugin touts such an outlook on his website, where he calls himself "a different kind of Republican."
"I'm a Jersey guy. I have values that I think are consistent with the people of New Jersey," he said Thursday. "I'm pro-choice, I'm pro-marriage equality, I'm pro-equal-pay-for-equal-work. I believe in sound environmental policies."
With less than a week left until Election Day, Hugin's ability to navigate this campaign middle-ground has put enough of a scare into Democrats — a Quinnipiac Poll conducted last month found Menendez with only a 51-44 lead, after he won his last election by more than 18 points — that national Super PACs have poured almost $7 million into ads attempting to scare Trump-phobic voters away from Hugin by linking him to the president.
Hugin insists that he's more than willing to break from the White House on issues with which he disagrees. He addressed Trump's recent proposal to put an end to birthright citizenship, as guaranteed by the 14th Amendment, via executive order, a proposal with dubious legal standing, according to experts.
"I'm a big believer in the Constitution, and we shouldn't change the Constitution lightly. We should make sure that we bring people together, talk about the issues and do what's right," Hugin said. "If 150 years worked well, in terms of the 14th Amendment, we've got to make sure, before we make a change, we do it very prudently and carefully and ensure the American people are with us."
"I don't think we should be doing major changes through executive orders," he added.
But when pressed on where he fits in an ever-changing Republican Party, which counts Trump as its face, and which Washington politicians he could model himself after, Hugin demurred and said he wanted to chart his own path.
"I'm a leader, not a follower," he said. "I admire many people, and there's attributes of many people, Democrats and Republicans, that I admire, but I want to be the best that I can be and my job is to serve the people of New Jersey. That's how I can be judged."
Copyright © 2018, ABC Radio. All rights reserved.