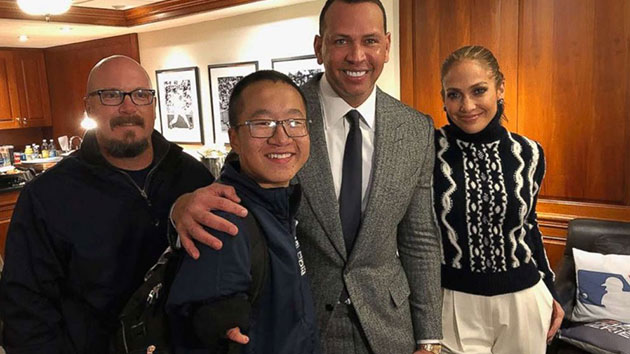 Courtesy Tracey Quist(BOSTON) — A high school sophomore from Wyoming recently had a "once-in-a-lifetime" experience, all thanks to an essay he'd written about baseball legend Jackie Robinson.

Jesse Quist was recognized on Oct. 24 at Fenway Park, home of the Boston Red Sox, as one of two winners in Major League Baseball's 2018 "Breaking Barriers: In Sports, In Life" essay contest.

Quist, 15, of Cheyenne, Wyoming, is a Korean adoptee with two parents and seven siblings. He was born missing most of both of his arms. He has no hands but uses what he calls "nubbins" — two fingers on his left arm and one finger on his right.

As part of his winnings, Quist was invited to attend Games 1 and 2 of the World Series between the Red Sox and Los Angeles Dodgers.

"It was crazy," Quist told ABC News about being at the game. "It was definitely one of the loudest baseball games that I've ever been to. … The crowd was wild."

The Red Sox defeated the Dodgers in the end, taking the series, 4-1, and winning the 2018 World Series. Quist, a Colorado Rockies fan, said he was just happy to be in the stands enjoying the moment.

The contest — a joint effort by Jackie Robinson's daughter, Sharon Robinson, the MLB, and children's publisher Scholastic — asks students in grades 4 to 9 to discuss how they'd used values exemplified by Jackie Robinson to overcome "barriers or obstacles" in their lives.

Quist's essay was chosen among 13,000 essays submitted from around the U.S., Puerto Ric and Canada, according to the MLB.

"It was just a shock to me. I didn't think I was going to win," he told ABC News. "I just wanted to get my story out there."

He told ABC News that when his mother found the essay contest, the topic really spoke to him, particularly because he'd seen the movie "42" about Jackie Robinson, an MLB Hall of Famer who broke baseball's color barrier in 1947 when he became the first black athlete to play for the league.

In his essay, Quist said in part, "I have pretty much learned how to do things differently and in my own unique way. … To learn how to write, eat and basically do everything needed for everyday life, I used determination, commitment, persistence and excellence."

He said that he had incredible respect for the baseball player.

"It can be very frustrating knowing that everywhere you go, there will always be someone whispering about you. … There's no doubt in my mind that Jackie Robinson experienced the same thing: the pointing and staring and whispering," Quist wrote.

"(Jackie Robinson) just went out and played baseball and, you know, showed the world that he deserved to be in the MLB," Quist told ABC News. "I wanted to be like him. … I've got a book about Jackie Robinson sitting underneath my alarm clock in my room."

Quist, who attended high school last year but is now home-schooled, said an everyday challenge was people's reactions to him.

"Everywhere I go, I'm going to get, you know, stared at, pointed at. That's always an everyday challenge, everywhere I go," he said.

Quist, who has run cross-country and track as well as played soccer and basketball, said he'd like to go to college and attend law school, or be an English teacher or professor.

"I try not to let anything stop me," he said. "Jackie Robinson definitely showed that you can do anything that you want to do as long as you're driven to do it."