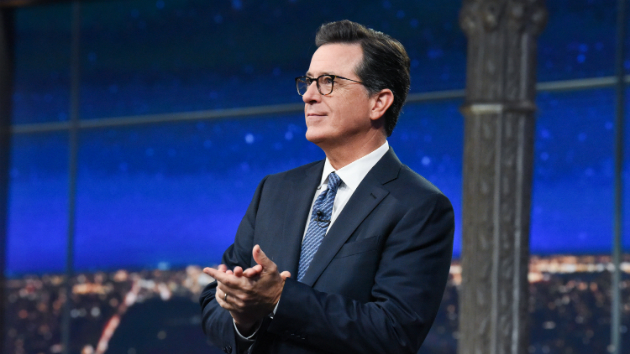 Scott Kowalchyk/CBS via Getty Images(NEW YORK) — President Donald Trump said Americans might "lose a lot of money" after the midterms if they don't vote for Republicans, and that threat didn't sit well with Stephen Colbert.
"Trump's a little nervous, so he's tried everything to scare his base into voting for Republicans. And today he spoke about a threat to the one thing most precious to him: money," Colbert noted on The Late Show Wednesday. "I believe that's called 'extortion.'"
Trump made the comments during an interview on Wednesday ahead of his multi-day tour on the campaign trail.
"If the midterms for some reason don't do so well for Republicans, I think you're all going to lose a lot of money," Trump said. "I hate to say that. I think you're going to lose a lot of money."
Colbert said the president's claims reminded him of a badly written ransom note.
"Look, I'm just going to say, really nice economy you've got here. I'd hate to see something happen to it," said Colbert, impersonating the president. "I'm just saying, I've stuffed the Dow with oily rags, and my son Eric loves to play with matches."
Copyright © 2018, ABC Radio. All rights reserved.