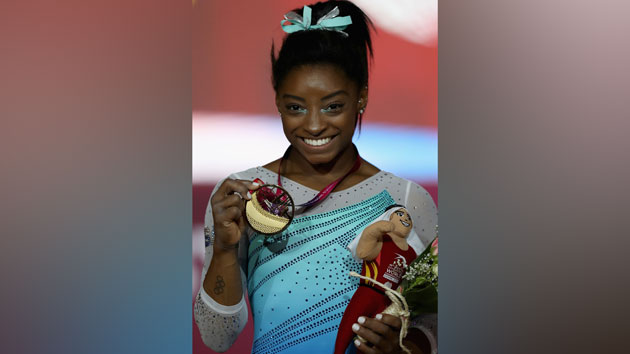 Francois Nel(DOHA, Qatar) — Simone Biles made history as the first woman to win four all-around world titles when she took home her fourth world championship title today in Doha, Qatar.
Biles, 21, beat out Mai Murakamai of Japan and fellow Team USA member Morgan Hurd to win the gold medal, despite falling two times during her all-around final.
Biles skyrocketed to fame as a member of the "Final Five" women's gymnastics team that took home gold medals during the 2016 Summer Olympics in Rio de Janeiro, Brazil.
She may have taken two tumbles during the competition, but Biles was rewarded by judges for the level of difficulty she went for, according to reports.
Despite her history-making win, the Texas native says she still believes she can do better.
Biles wrote in an Instagram post that she had "so many emotions" and that it has been "less than a year since I got back into training so I try not to be too hard on myself."
She continued: "Although I still placed 1st and MADE HISTORY I’m not entirely pleased with my performance. I’m still trying to find my confidence. But I won’t give up ?? I’m proud of myself! —> now onto finals."
When not competing, Biles has become an increasingly vocal critic of USA Gymnastics leadership in the wake of the Larry Nassar sexual abuse scandal.
Copyright © 2018, ABC Radio. All rights reserved.