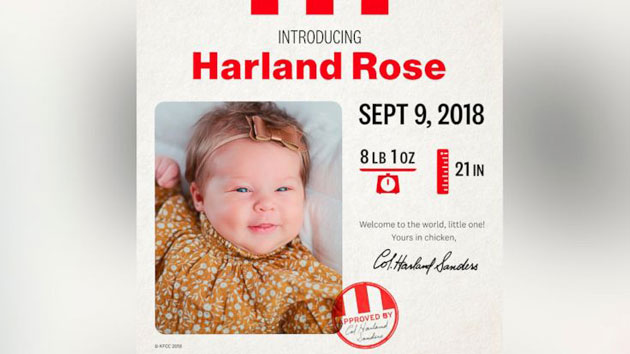 KFC(SOUTHERN PINES, North Carolina) — A baby named Harland Rose now has $11,000 to put towards her college fund thanks to KFC and their notably famous chicken salesman.
Harland was given her name after Kentucky Fried Chicken announced that they were holding a contest where they'd award a sizable donation to the first child named Harland who was born on founder Colonel Harland David Sanders' birthday (Sept. 9, 2018).
Harland "Harley" Rose was born Sept. 9 at 8 pounds, 1 ounce to parents Anna Pilson and Decker Platt, of Southern Pines, North Carolina, KFC announced Tuesday on Instagram.
Platt, a dad of two, told "Good Morning America" that his partner, Pilson, was originally due to give birth on Sept. 17.
"I love it [the name Harland]," Platt told "GMA." "It wasn't on my list and Anna, it wasn't on her list before hearing about the contest. I didn't need any convincing — I laughed out loud about it."
Platt said that after hearing about KFC's contest through word of mouth, he and Pilson decided to add Harland on their list of potential girls' names. But when Pilson went in to active labor on Sept. 8, the night before Colonel Harland Sanders' birthday, that's when Harland became the front-runner for their daughter's name, Platt said.
Harland Rose arrived at 12 seconds after midnight, shortly after the contest opened, making her the winner of the $11,000, KFC confirmed to "GMA."
"With the amount of time she's got left until she goes to college, she could do whatever she wants with [the money]," Platt said. "She's a really happy, easy baby. We couldn't have it any better."
Copyright © 2018, ABC Radio. All rights reserved.