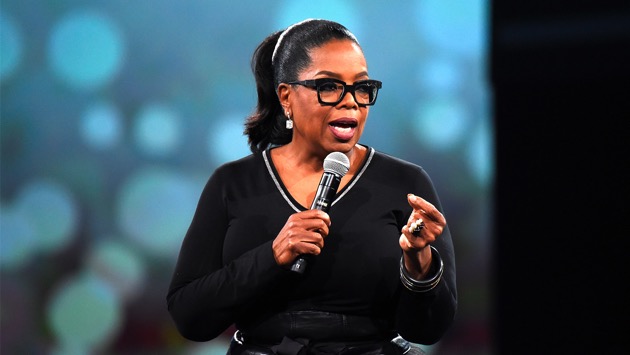 Kevin Mazur/Getty Images for Robin Hood(MARIETTA, Ga.) — "Georgia you've been on my mind!" billionaire icon Oprah Winfrey told a cheering crowd Thursday in Marietta, Georgia, as she brought her star power to help elect Democratic nominee Stacey Abrams.
"I was just sitting at home in California minding my own business but I could not stop thinking about what's going on down here," Winfrey said at the first of two town hall campaign events for Abrams.
Winfrey said she reached out to Abrams and asked to campaign for her because Abrams stands for the values that matter.
“Girl let me," she said she told Abrams when she got her on the phone. "Pull over to the side of the road!"
She added that her mission was personal.
"Nobody paid for me to come here, nobody even asked me to come here, I paid for myself and I approve this message."
"I am an independent woman," Winfrey said. "I've earned the right to think for myself and to vote for myself, and that's why I am a registered independent."
The events are billed as "a conversation on the critical value of women in leadership and what is at stake for our communities in the election.”
The second event is in Decatur, Georgia.
Abrams hopes to make history on Election Day by becoming the first African-American female elected governor in U.S. history.
Winfrey, once the subject of speculation that she wanted to run for the White House, has ruled out challenging President Trump in 2020.
Winfrey is the latest high-profile figure to campaign in the state’s close gubernatorial race. Former President Barack Obama will also campaign for Abrams this week and comedian/actor Will Ferrell went door-knocking for Abrams last week.
Before the event Abrams thanked Winfrey in a statement, saying she said has "inspired so many."
"Oprah Winfrey has inspired so many of us through the years with her unparalleled ability to form real connections and strengthen the bonds of family and community. I am honored to have Oprah join me for uplifting and honest conversations with voters about the clear choice before us in this election and the boundless potential of Georgians," Abrams said in the statement.
Vice President Pence was in Georgia Thursday, campaigning for Abrams’s opponent, Republican nominee Brian Kemp, President Trump was set to do so as well before Election Day.
After saying he had "heard Ophrah was in town," Pence accused Abrams of being "bankrolled by Hollywood liberals." He said he had a "message for Abrams' Hollywood friends: This ain't Hollywood."
Abrams and Kemp are running to replace outgoing GOP Gov. Nathan Dean, who is term-limited.
Copyright © 2018, ABC Radio. All rights reserved.