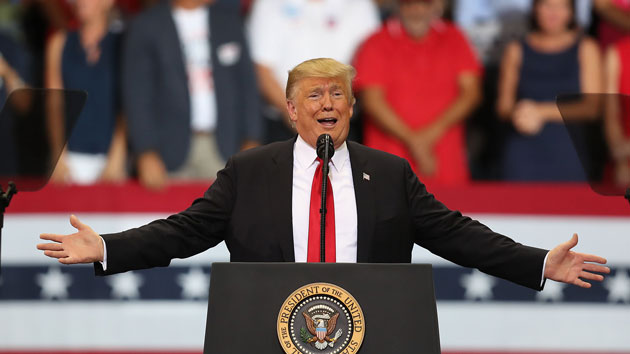 Joe Raedle/Getty Images(WASHINGTON) — President Donald Trump's latest campaign ad featuring an immigrant who was convicted of killing police officers is being criticized as racist and drawing parallels to another controversial commercial that seemed to play on the same fears 30 years ago.
Luis Bracamontes is a Mexican immigrant who was sentenced to the death penalty in April after being convicted of killing two California sheriff's deputies in 2014. Bracamontes' penchant for curse-laden rants about killing cops got him expelled from the courtroom and earned him a place in one of Trump's campaign ads in January.
Trump's latest ad featuring Bracamontes uses video of him in court with text overlays that say he “killed our people!” and claims that “Democrats let him into our country” and “Democrats let him stay.” That's followed by footage of people who appear to be part of a migrant caravan pushing down gates, along with another immigrant’s interview and his alleged history of attempted murder. Text then appears asking: “Who else would Democrats let in?” The ad offers no evidence for claims that Democrats let Bracamontes, who was deported twice, into the country.
The ad was released on Oct. 31, just six days before the midterms. It was also released on the same day that the Trump administration announced it would be increasing the number of U.S. troops at the southern border from just over 5,000 to 10,000 or 15,000 to deal with the migrant caravan Trump has repeatedly claimed qualifies as an invasion.
Kim Fridkin, a political science professor at Arizona State University who specializes in negative ads, said Trump's latest offering "is playing to racial fears of 'the other.'"
"He's portraying immigrants as criminals basically, so in that way, I think it has racial undertones or overtones," Fridkin said.
Mo Elleithee, the executive director of Georgetown University’s Institute of Politics and Public Service, was more frank.
“I think it is one of the most racist ads we've seen in a long time,” said Elleithee, who worked as a campaign strategist for Hillary Clinton and was a spokesman for the Democratic National Committee. “It is preying on people's fear of immigrants, and to the extent that anyone’s motivated by racism, that clearly taps into that.”
Trump has pinned the ad to the top of his Twitter timeline, writing: "It is outrageous what the Democrats are doing to our Country. Vote Republican now!"
But the president's critics also took to Twitter to critique the ad. Al Cardenas, a former chairman of the Florida Republican Party and former chair of the American Conservative Union, was one of them.
“It’s all about you,” Cardenas wrote in a tweet responding to Trump’s tweet with the ad. “Attacking the GOP Speaker a week before the elections is egomaniacal & counterproductive. I really, really despise your politics & your harmful impact on our country’s social fabric.”
Sen. Jeff Flake, R-Arizona, who has also been critical of Trump, tweeted Thursday that “This is a sickening ad. Republicans everywhere should denounce it.”
Both Elleithee and Fridkin compared Trump’s ad to the one that featured felon Willie Horton during the 1988 presidential election and was produced by a group that supported George H.W. Bush’s bid. At the time, the Horton ad was widely seen as one of the most controversial political ads in modern American history.
“I think that when people, political scientists, hear the word ‘Willie Horton,’ what they remember is the ad that was trying to illicit race as an issue and try to play to people's fears of blacks as perpetrators of a crime,” Fridkin said, adding that she sees this Trump ad as having a similar message but applying it to immigrants.
“I think it is on the same level and that ad,” she said of the Horton ad.
ABC News political analyst Matt Dowd went further, saying that it "ranks up there with the Willie Horton ad, but I think this is even worse."
"It is the most divisive ad I have seen created since the advent of television and the internet," Dowd said.
Elleithee said that this ad plays into the anger that Trump and other Republicans are using to “motivate and mobilize their base” ahead of the upcoming midterm elections.
“What we're seeing is him preying on racist elements in order to tap into fear, and I don’t think anyone can argue that it's anything other than blatant, racist fear mongering,” Elleithee said.
This upcoming election “has been a fear and anger election” on both sides, Elleithee said, noting that “Democrats have been angry every day after 2016” and are “channeling that anger into political activism.”
“There has been an enthusiasm gap and the president is trying to narrow that gap” by trying to tap into his base, Elleithee said.
Dowd agreed, saying the ad is all about "trying to incite his base on this issue before Election Day," but warned that it could hurt Republican candidates.
"Any help it might provide the GOP among the base is going to hurt the GOP twice as much among independent voters who will decide this election," he said.
Copyright © 2018, ABC Radio. All rights reserved.