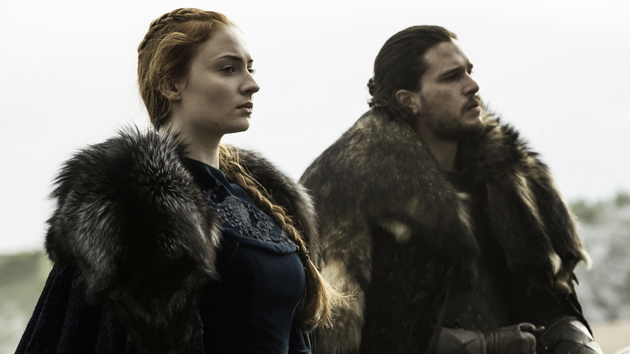 Sophie Turner and Kit Harington; Helen Sloan/courtesy of HBO(NEW YORK) — Game of Thrones fans know Jon Snow, played by Kit Harington, is the character whose former lover was fond of telling him he "knows nothing." But when it came to the eighth and final season of the monster hit HBO series, it was literally true.

Harington tells Entertainment Weekly in their exclusive Game of Thrones final season sneak peek that he didn't read the season's scripts. That meant he was only one of two actors who came to the first table read, as its called, with no idea of how the series ended.

“What’s the point of reading it to myself in my own head when I can listen to people do it and find out with my friends?” Harington tells EW.

The other actor? Liam Cunningham, who plays Ser Davos Seaworth. He couldn't figure out how to open the emailed scripts' security.

Don't expect a lot of season eight spoilers from EW. They do reveal it opens with Daenerys Targaryen and her army arriving at the Stark ancestral home of Winterfell, where they all prepare for their final battle with the Night King and his army of the dead.

That battle's more then epic, it's historic: producers say it's the longest sustained action sequence ever created for TV or film, taking more than two months to shoot.Peter Dinklage, who plays Tyrion Lannister, says, “It makes the Battle of the Bastards look like a theme park," referring to the mammoth season six battle.

And if you expected tears from the actors, there were lots. Harington said he cried twice: once at a particular scene, and the second time when he read 'End of Game of Thrones' on the last page of the final script.

Game of Thrones returns to HBO next year. The Entertainment Weekly issue is out now.