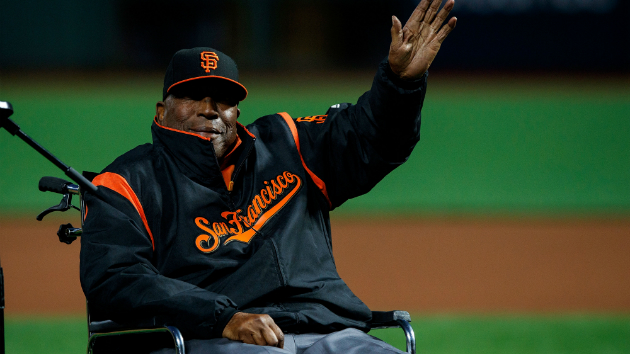 Jason O. Watson/Getty Images(SAN FRANCISCO) — San Francisco Giants legend and Hall of Famer Willie McCovey died on Wednesday at the age of 80.
In a statement, the Giants said the former first baseman “passed away peacefully” in the afternoon “after losing his battle with ongoing health issues.”
"San Francisco and the entire baseball community lost a true gentleman and legend, and our collective hearts are broken," Giants President and CEO Laurence M. Baer said in a statement. "Willie was a beloved figure throughout his playing days and in retirement. He will be deeply missed by the many people he touched.”
McCovey made his debut with the Giants on July 30, 1959. He played with the team through 1973 before being traded to the San Diego Padres. He later went to the Oakland Athletics in 1976 before returning to San Francisco in 1977, where he played until he retired in 1980.
McCovey ended his MLB career with a batting average of .270, 1,229 runs scored, 353 doubles, 46 triples, 521 home runs and 1,555 RBI. He was a six-time All-Star, and was named the National League Rookie of the Year in 1959 and the National League MVP in 1969.
In 1986, he was inducted into the National Baseball Hall of Fame during his first year of eligibility.
McCovey is survived by his wife, daughter, three grandchildren, sister and two brothers.
The Giants said a public celebration of his life will be announced at a later date.
Copyright © 2018, ABC Radio. All rights reserved.