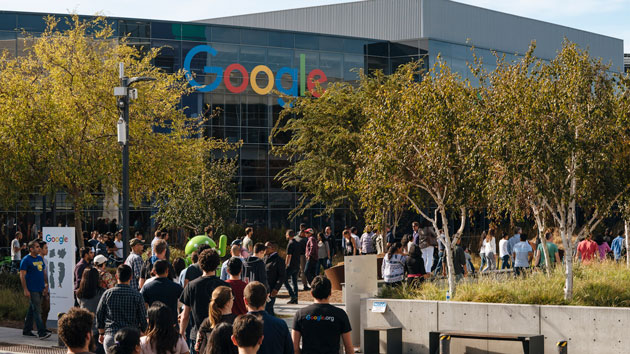 Mason Trinca/Getty Images(NEW YORK) — Google employees around the world walked out of their offices on Thursday to protest how the technology company handles sexual misconduct allegations.
Hundreds of workers walked off the job at offices from Tokyo to Singapore, Zurich to London, New York to San Francisco.
"I'm here protesting against harassment in the workplace to make sure we don't protect or support those perpetrators of harassment," one demonstrator told Sky News outside Google's office in London, where a crowd of dozens of workers gathered.
The worldwide demonstrations come one week after a New York Times investigation revealed that Google in recent years has handed multimillion-dollar exit packages to male executives accused of sexual misconduct, while keeping quiet about the allegations.
The executives reportedly include Andy Rubin, the creator of Android mobile software who departed the company in 2014.
Rubin was accused of coercing a female employee, with whom he had been having an affair, into performing oral sex in a hotel room in 2013, according to The New York Times story, which cited "two company executives with knowledge of the episode."
Google investigated the woman's claim and found it to be credible, and then-CEO Larry Page asked Rubin for his resignation. Rubin received a $90 million exit package, paid in installments over four years, The New York Times reported, citing "two people with knowledge of the terms."
Rubin was among three executives that Google "protected over the past decade after they were accused of sexual misconduct," The New York Times story reads, in part. Two of the executives, including Rubin, were paid millions of dollars as they left the company, while a third executive remained employed in a "highly compensated post," according to the article.
In each case, the company "stayed silent about the accusations against the men," the newspaper reported.
Rubin denied the accusations and blasted The New York Times for reporting "numerous inaccuracies" and "wild exaggerations."
"The New York Times story contains numerous inaccuracies about my employment at Google and wild exaggerations about my compensation. Specifically, I never coerced a woman to have sex in a hotel room," Rubin said in a two-part statement via Twitter, after the publication of the Oct. 25 article.
"These false allegations are part of a smear campaign to disparage me during a divorce and custody battle. Also, I am deeply troubled that anonymous Google executives are commenting about my personnel file and misrepresenting the facts."
Google CEO Sundar Pichai and Page, who co-founded Google and is now the CEO of its parent company, Alphabet, have issued apologies over the past week, since the bombshell report.
Pichai told employees in an email Tuesday that the company fired 48 people for sexual harassment over the past two years, and none of them received an exit package.
"I am deeply sorry for the past actions and the pain they have caused employees," Pichai wrote in the email obtained by ABC News. "Larry mentioned this on stage last week, but it bears repeating: if even one person experiences Google the way the New York Times article described, we are not the company we aspire to be."
Many employees remained enraged and they encouraged their coworkers around the globe to collectively walk out in protest on Thursday.
"As Google workers, we were disgusted by the details of the recent New York Times article, which provided the latest example of a culture of complicity, dismissiveness, and support for perpetrators in the face of sexual harassment, misconduct, and abuse of power," employee organizers said in a press release emailed to ABC News.
"As the recent article and the executive response make clear, these problems go all the way to the top. While Google has championed the language of diversity and inclusion, substantive actions to address systemic racism, increase equity, and stop sexual harassment have been few and far between. ENOUGH. Reassuring PR won’t cut it: we need transparency, accountability, and structural change."
"For every story in the New York Times, there are thousands more, at every level of the company. Many have not been told," organizers added. "We are part of a growing movement, and we are not going to stand for this anymore."
Google's CEO said workers "will have the support they need if they wish to participate" in the demonstrations.
"Earlier this week, we let Googlers know that we are aware of the activities planned for today and that employees will have the support they need if they wish to participate," Pichai said in a statement to ABC News on Thursday.
"Employees have raised constructive ideas for how we can improve our policies and our processes going forward. We are taking in all their feedback so we can turn these ideas into action."