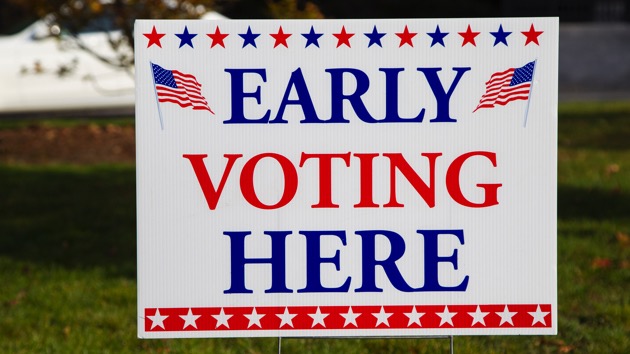 iStock/Thinkstock(GAINESVILLE, Fla.) — 2018 early voting could be poised to largely surpass 2014 figures, according to at least one analysis of such data.
Data from nationwide Secretaries of State is compiled by Michael McDonald, an associate professor in political science at the University of Florida who is widely cited as the expert on early voting.
Texas is poised to largely surpass its early voting totals in its 30 reporting counties. 3,695,100 ballots have been cast as of Wednesday morning, compared to 2014's statewide total of 2,066,368, according to the Texas Secretary of State.
That's 178.8% of the total vote cast in 2014. In a state with a contentious Senate race with a progressive candidate, Texans may be more motivated to vote as Democrats grip onto hope of turning the Senate blue.
Georgia is following the same trend. 2014 statewide totals came out to 1,069,912. The state has already seen a 155.4% uptick from that number, with 1,662,373 ballots cast as of Wednesday morning, according to their secretary of state's office.
A close gubernatorial race is unfolding in that state between current Republican Secretary of State Brian Kemp and Democrat Stacey Abrams. If Abrams wins, she would be the first female African-American governor in the nation.
Kemp, who is backed by President Donald Trump has advocated for stronger voter identification laws and has faced criticism over the more than 53,000 voter applications that were put on hold due to the state’s restrictive “exact match” laws – regulations which require voters' information on the rolls exactly match their government-issued identification. A coalition of civil rights groups has sued over the law which they say disenfranchises minority voters.
If Abrams hopes to win, she’ll need those votes.
Early voting is underway in all 34 of the states that offer the option.
McDonald breaks down the numbers by state, mail-in and in-person ballots.

Early voting is underway in: