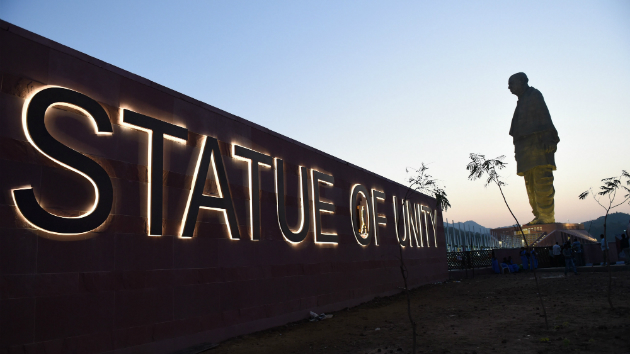 SAM PANTHAKY/AFP/Getty Images(LONDON) — The prime minister of India on Wednesday unveiled the world’s largest statue, dedicated to Sardar Patel, a nationalist who helped unite modern India after its independence from Britain.
"We are doing everything possible to turn Sardar Patel's vision into a reality and ensure a good-quality life for our fellow Indians," Prime Minister Narendra Modi tweeted.
The monument, called the Statue of Unity, stands at nearly 600 feet and cost $460 million to build.
That makes the mega statue almost 200 feet higher than the world’s next largest, the Spring Temple Buddha in China, which stands at about 420 feet. The new statue in India is also nearly twice the height of the Statue of Liberty, which is 305 feet tall.
The Statue of Unity, located in the western state of Gujarat, is expected to attract tens of thousands of tourists per day. The project has proved controversial, however.
Farmers in the state of Gujarat were reportedly bemused that millions of dollars were spent on the flagship project. The BBC reported that locals have expressed deep concern that they still lack basic irrigation facilities vital to the region’s economy while mass investment has been diverted to a largely-ceremonial project.
But completion of the towering monument ends a critical debate over which political party has the best claim to the legacy of one of Indian history’s most revered figures.
Though little known outside of India, Patel — the nation’s first deputy prime minister — is a favorite of Modi and his ruling Bharatiya Janata Party (BJP), according to Elizabeth Chatterjee, a professor of political science at Queen Mary University of London.
Although Patel was a major figure in the rival party, the Indian National Congress, Modi “celebrate[s] Patel as the great uniter of India and a defender of the country's Hindu majority,” Chatterjee told ABC News.
Chaterjee said Modi's "own image is modeled on Patel's: A man of action, a forceful administrator, and a close friend of big business."
Daniel Haines, a historian of colonial India at the University of Bristol, told ABC News the choice to commemorate Patel was unsurprising.
"The freedom movement leaders who are best known in the West, Mahatma' Gandhi and Jawaharlal Nehru, have lost popularity among many Indians since at least the 1990s, partly due to the mainstreaming of Hindu nationalist philosophy and politics," he said.
The giant statue overlooks the Sardar Sarovar Dam on the Narmada River, a centerpiece of the Rajasthan government’s economic policy. The unveiling on Oct. 31 coincides with Patel’s birthday.
The Statue of Unity will not hold the title of world’s tallest statue for long. Construction is underway for an even bigger statue near the Indian city of Mumbai, which will depict the Marathan warrior King Shivaji on horseback in the Arabian Sea. Officials believe that the statue will stand at 695 feet when construction is complete,, according to the newspaper Indian Express.