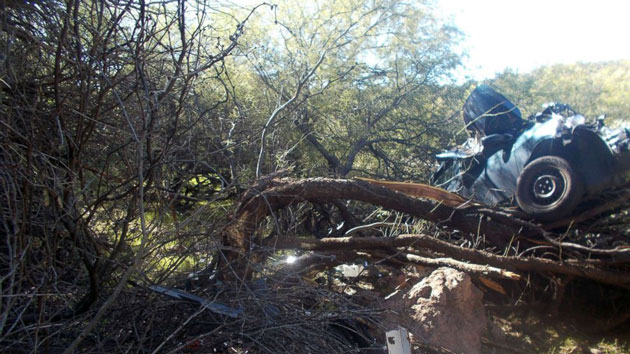 Arizona Department Of Public Safety(WICKENBURG, Az.) — A woman who crashed her car in Arizona was able to survive for six days before she was found, local authorities said.
The 53-year-old woman was driving along U.S. route 60 in Wickenburg when she lost control of her car, broke through a fence on the roadside and fell 50 feet, landing in a tree.
No one seemed to witness the crash, which occurred on Oct. 12, and it was six days before someone found her, the Arizona Department of Public Safety (AZDPS) said in a press release.
AZDPS was notified of the crash by Department of Transportation maintenance crewmembers Zach Moralez and Josh Miller, who were working with a rancher, Dave Moralez, to capture a cow along the route. That's when they noticed the damaged fence and went to investigate the cause.
“When they stood by the damaged fence, they observed a mangled vehicle lodged in a mesquite tree about 50 feet down from the roadway,” the AZDPS statement said, adding that the department sent a trooper, Caleb Hiegel, to the scene.
When the group searched the car, however, they didn't find anyone.
Hiegel and Zach Moralez followed tracks for about 500 yards before finding the woman, who was severely dehydrated and had serious injuries. They began treating her as they waited for a medical helicopter to arrive, the statement said.
The woman told Hiegel about her ordeal, adding that she had stayed inside the vehicle for several days before climbing out.
“Once she climbed out, she walked toward the railroad tracks in the area with the hope of being discovered,” AZDPS said. “She never made it because of her weakened physical state.”
In the statement, AZDPS Director Frank Milstead praised everyone involved for working together to help the woman.
“The diligence of the ADOT crew and teamwork of everyone involved is exemplary and to be commended,” Milstead said. “Due to their outstanding efforts, this woman’s life was saved.”
Copyright © 2018, ABC Radio. All rights reserved.