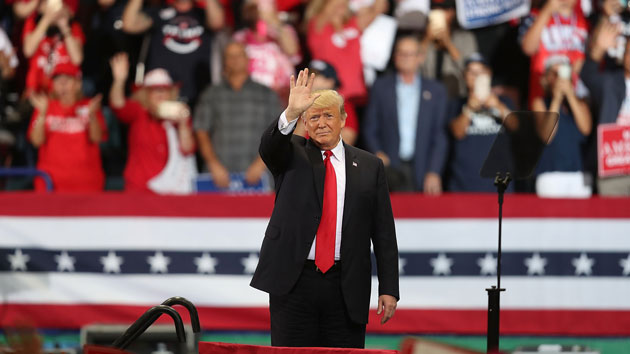 Joe Raedle/Getty Images(ESTERO, Florida) — The day after making a visit to the site of the nation’s latest mass shooting in Pittsburgh, President Trump accused the media of sowing division in the nation because with coverage of protesters that came out to oppose his visit.
"Yesterday’s [Tuesday] visit to Pittsburgh was about coming together to heal, after this day of unity and togetherness, I came home and sadly turned on the news and watched as the far left media, once again, used tragedy to sow anger and division," Trump said.
The crowd broke into chants of "CNN sucks, CNN sucks."
"Sadly, they took a small group of protesters far away from where we were because we could not have been treated better, the first lady and myself were representing the presidency and they did everything in their power to try and play it up and push people apart, that’s what’s happening, they’re pushing people apart," Trump said, taking issue with the media’s coverage of the protesters. "It was fake and it was make believe … and when we talk about division this is a big part of the division right there."
"The left wing media doesn’t want to solve problems, they want to stoke resentment, it has to stop," Trump said.
President Trump decried the "crazy policy" of birthright citizenship, and said "we will finally end" it.
"Hundreds of thousands of illegal immigrants are made automatic citizens every year because of this crazy policy," Trump said. "Under this policy anyone who breaks into our country and has a child the very next moment that child will be made a citizen for life."
"This policy has even created an entire industry of birth tourism – big business. Where pregnant mothers travel to America to make their children instant American citizens," Trump said to supportive boos from the crowd.
"The constitution does not require, I’m saying that to the media, does not require it, because illegal aliens are not subject to the jurisdiction of the United States," Trump said.
As the president kicked off his final six day, 11-rally sprint to Election Day with his rally in Florida tonight, he was also anxious to talk about the stakes of the election and turn the conversation back to immigration.
Trump called next Tuesday’s midterms on of "the most important elections of our lives" but added a caveat: "Though I will say, not as important as 2016."
He warned of the approaching migrant caravan currently making its way up through Mexico, warning that "they’ve got a lot of rough people in those caravans, they aren’t angels."
The president then criticized the so-called policy of "catch and release" by suggesting that he will catch, but not release the coming migrants.
"It’s called catch, but we take the word release out," Trump said. "We’re not going to release anymore, we have no choice."
At one point the president inquired about who in the crowd had voted early. After loud cheers, the president joked: "Then what the hell am I doing here tonight? What am I doing?”
"It’s like 100 percent of the people in this room voted," the president remarked.
The president invited both Gov. Scott and gubernatorial candidate Ron Desantis to speak. When he came back to the microphone, the president slammed Gillum "too extreme for the people of Florida," and called him a "radical socialist" who wants to turn Florida into Venezuela, "throw open your borders," and take a "wrecking ball" to Florida’s economy.
Copyright © 2018, ABC Radio. All rights reserved.