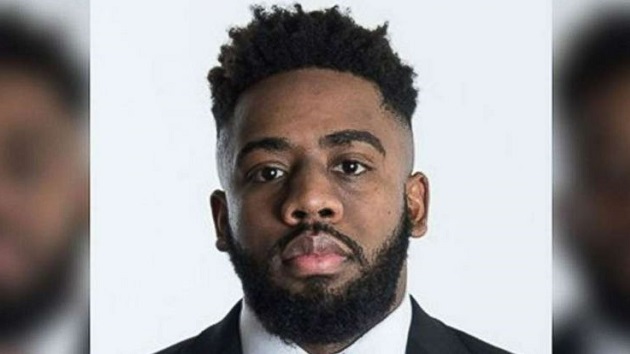 WABC-TV(NEW BRUNSWICK, N.J.) — A Rutgers University football player was arrested and charged on Tuesday in connection to a murder plot, police said.
Izaia Bullock, a junior linebacker, was accused of initiating a plan to kill "the family members of an acquaintance," according to the Middlesex County prosecutor's office.
The office did not release any details about the alleged plot, but it said the "intended victims" weren't affiliated with the New Brunswick, New Jersey-based university.
Bullock, 22, was arrested after an investigation by the Rutgers University Police Department and the Middlesex County Prosecutor's Office determined he initiated the plot on Oct. 29, the prosecutor's office said in a statement. He was charged with two counts of attempted murder in the first degree and two counts of conspiracy to commit murder in the first degree.
Rutgers dismissed Bullock from the football team in the wake of the charges and school officials said he could face disciplinary actions. He made his Rutgers football debut in September — the first and only game in which he played.
"Izaia Bullock has been dismissed from the team. The university is initiating disciplinary proceedings. All further questions should be directed to the Middlesex County Prosecutor’s Office," a Rutgers spokesperson said in an email statement to ABC News.
Bullock previously attended Middlesex County College in Edison, New Jersey, about 25 miles southwest of Newark, where he wrote for the school's newspaper, according to My Central Jersey, a local media outlet.
"He published several stories in the school newspaper, Quo Vadis, and regularly attended the newspaper meetings,” Melissa Edwards, a journalism professor at Middlesex County College, told the outlet. “He was also quite outgoing and always made constructive comments in class. He expressed that his dream was to play football."
Bullock was being held at a New Jersey jail pending an initial court appearance. It's unclear if he'd obtained an attorney.
Copyright © 2018, ABC Radio. All rights reserved.