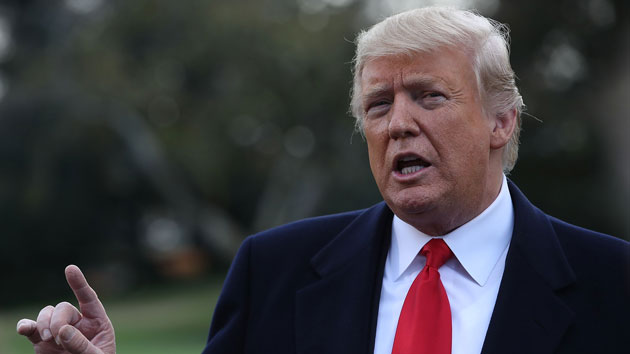 Mark Wilson/Getty Images(NEW YORK) — A pro-Trump super PAC that has been mostly dormant since the 2016 presidential election is back in action with seven-figure support from top GOP donors.
Just in the last two weeks of October, Future45 has spent more than $4.5 million on ads targeting high profile liberals and the Democratic leadership, according to Federal Election Commission records.
One of its latest ads depicts a county full of protests, dark mobs and ominous music, while showing House Minority Leader Nancy Pelosi, Senate Minority Leader Chuck Schumer, Sen. Elizabeth Warren of Massachusetts, and independent Sen. Bernie Sanders of Vermont. The narrator claims that “voting for any Democrat” regardless of district will lead to the “rise of socialism,” “undefended open borders” and “immediate tax increases.”
The Republican group’s aggressive last-minute ad blitz is backed by a $5 million donation from President Donald Trump’s wealthy allies, including $1 million each from financier Charles Schwab and hedge fund giant Paul Singer, campaign finance reports show.
Chicago Cubs co-owner and TD Ameritrade founder Joe Ricketts, who has been leading fundraising for Future45 since 2016, also donated more than $2 million to the super PAC with his wife Marlene Ricketts.
The Republican National Committee declined to comment.
Until the slew of big checks came in around early October, Future45, which had spent nearly $25 million in support of Trump during the 2016 election cycle, had been mostly silent since the presidential election, without raising any money — except for $104,000 from Oklahoma Strong Fed Leadership PAC and Liberty 2.0, both associate with former EPA Administrator Scott Pruitt — and not spending any money on ads.
Future45 have been around since 2015, but came into attention when Casino mogul Sheldon Adelson, with his wife Miriam Adelson, funneled $20 million into the super PAC in late in the last two months of the 2016 election cycle. The Adelsons have not made any donation to the super PAC this cycle.
The Las Vegas billionaire has maintained his reputation as the single biggest Republican megadonor this election cycle, giving at least $87 million to various groups and campaigns with his wife, according to Center for Responsive Politics’ analysis of FEC records. This includes $30 million to Congressional Leadership Fund, $25 million to Senate Leadership Fund and $10 million to pro-Trump super PAC America First Action, associated with Trump campaign manager Brad Parscale.
While Future45 has been dormant, its nonprofit arm the "45Committee" has been vigilant in running ads in support of the president and his policies, including his tax reforms and the nomination Judge Brett Kavanaugh for Supreme Court.
Because of the group’s 501(c)(4) status, which allows different disclosure requirements from PACs, however, it’s not clear how much the 45Committee has spent in support of Trump and Republicans in total this election cycle and who’s behind the effort. According to a tax return obtained by Citizens for Responsibility and Ethics in Washington earlier this year, the nonprofit spent about $21.6 million on political activities out of its $45.5 million spending between April 2016 and March 2017.
Copyright © 2018, ABC Radio. All rights reserved.