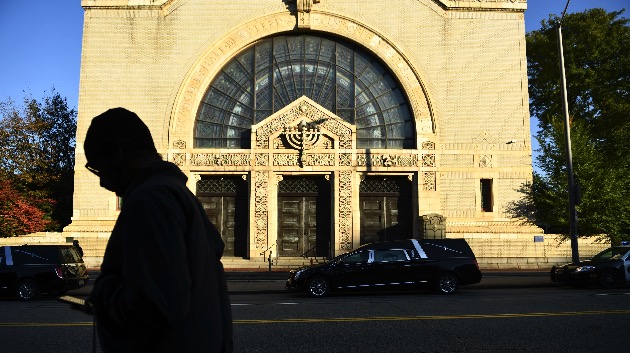 BRENDAN SMIALOWSKI/AFP/Getty Images(PITTSBURGH) — More victims of the Pittsburgh synagogue massacre will be laid to rest Wednesday.
Friends and family will gather at separate funerals to remember Joyce Fienberg, 75, Irving Younger, 69, and Melvin Wax, 88, who were among the 11 worshippers gunned down at the Tree of Life synagogue Saturday.
Fienberg, a former research specialist, is survived by her two sons and grandchildren. Her husband, "internationally acclaimed statistician" Stephen Fienberg, died in 2016.
"My mother-in-law was one of the kindest humans I've ever met," her daughter-in-law, Marnie Fienberg, told ABC News.
Irving Younger, a former small-business owner and youth baseball coach, was a regular volunteer and worshipper at the synagogue, where he would come early and stay late, The Pittsburgh Post-Gazette reported.
"I wouldn’t be surprised if he saw this gunman walk into the room where the services were and his first thought was, 'Can I help this stranger get settled?' Until he saw what the stranger was doing — because that’s the kind of thought that he would have," said Schachter, the former congregation president.
Younger was also "the most wonderful dad and grandpa,"neighbor Tina Prizner told the Pittsburgh Tribune-Review.
"He talked about his daughter and his grandson, always, and he never had an unkind word to say about anybody," Prizner said.
President Donald Trump and the first lady, joined by the president's son-in-law Jared Kushner and daughter Ivanka Trump, visited the synagogue Tuesday afternoon.
The president placed stones, as part of Jewish tradition, and white roses on the Stars of David set up in a makeshift memorial for those killed.
Rabbi Jeffrey Myers — who escaped the gunfire Saturday — greeted the president outside the Tree of Life as protesters gathered nearby.
Thousands of people from different faiths, apparently united in anger, marched toward the synagogue.
"Words have meaning!" some neighbors screamed toward the president's envoy.
After visiting the synagogue, the president and first lady went to a hospital where they met police officers who were wounded in the attack and medical staff.
Copyright © 2018, ABC Radio. All rights reserved.