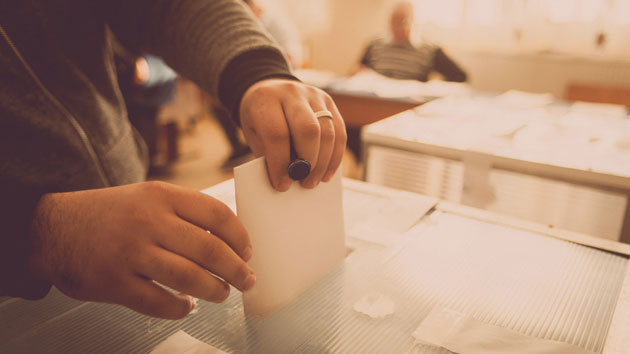 iStock/Thinkstock(NEW YORK) — A North Dakota tribe filed an emergency court motion Wednesday to block the state from implementing a key part of its new strict voter ID law.
The Spirit Lake Tribe, along with six individuals, had filed a suit Tuesday in federal court asking for relief from the state’s requirement of a residential street address for Native Americans living on or near reservations, many of whom lack street addresses.
The current law, recently upheld by federal courts, does not allow voters to cast a ballot without proof of their name, birth date and residential street address. The new court filing claims, however, that many Native Americans in North Dakota lack access to street addresses, as many in rural areas have IDs listing post office box addresses.
Tuesday's suit adds to a growing concern in the state that Native American voters will be disproportionately affected by the new voter ID law that the Supreme Court allowed the state to implement earlier this month, but there are also potential political ramifications. Sen. Heidi Heitkamp, a vulnerable Democrat running for re-election in a state Trump won handily in 2016, won by a narrow margin of under 3,000 votes in 2012 and had overwhelming support from Native American populations in North Dakota.
At least 500 voters on the reservations in North Dakota have been issued new updated IDs since the voter ID ruling, according to estimates ABC News has obtained from two tribes. The tribes have been printing and developing IDs for their citizens, issuing them free of charge at a significant cost to tribal governments.
Spirit Lake Tribe alone estimates that it had more 200 people living on the reservation without residential street addresses. Although the tribe says it's gotten new addresses or IDs for most of them, the lawsuit indicates there are people who still have not been assigned consistent, functional addresses, which means they may not be able to vote.
Spirit Lake Tribe says it has made efforts to get IDs free of charge to people lacking addresses as well as any other tribal members who would like one. But, as Spirit Lake Tribe Vice Chair Doug Yankton noted, the ID process is a cost that the tribe has had to bear for its residents.
“It’s been a challenge for us as a tribe in this short amount of time to organize what we need to do to help our people get the proper identification to vote next week. I think we’re doing a good job at it, but at a cost,” Yankton told ABC News Wednesday.
Yankton added that getting all their voters compliant with the ruling earlier this month has forced the tribe to stay open late and jump through many hurdles to get IDs to voters. “We have to stay open later than normal for where we do our ID making, our tribal enrollment office. We are issuing these IDs at no cost, so you have all the computer work and the paperwork,” he said.
In a statement, the tribe’s lawyers said that the State of North Dakota “has not provided the Spirit Lake Tribe with any resources to assist members in obtaining IDs with residential street addresses” and that “Secretary of State Alvin Jaeger has taken steps to worsen the situation,” by refusing to provide public comment on whether poll workers will accept addresses printed on newly issued IDs and also warning voters not to use residential street addresses that are incorrect, which could chill voting.

The North Dakota Secretary of State’s office told ABC News it does not comment on pending litigation.