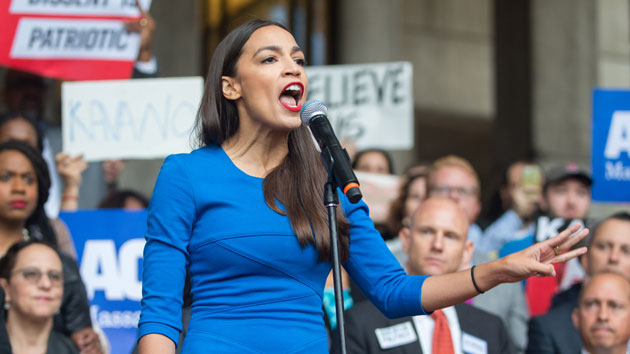 Scott Eisen/Getty Images(NEW YORK) — Alexandria Ocasio-Cortez has undoubtedly been a star this election cycle.
A first-time candidate, the Bronx native worked as a waitress when she presented incumbent Democrat Joe Crowley the first primary challenge he’d seen in 14 years.
“We hadn’t had a primary election in 14 years, and I feel like we can be better. That means it’s my responsibility to do something,” Ocasio-Cortez told ABC News.
At Boston University, she earned degrees in economics and international relations and then went on to work in the office of Democratic Sen. Ted Kennedy of Massachusetts. She later returned home and worked as a community organizer. In 2008, the recession started and her father died. To help her family, which had lost its primary source of income, she picked up jobs in restaurants, according to her campaign website. In 2016, she worked for Sen. Bernie Sanders’s 2016 presidential campaign.
She’s running on a Democratic-Socialist platform. Ocasio-Cortez, whose parents are Puerto Rican, has called for abolishing Immigration and Customs Enforcement, Medicare-for-all and a federal jobs guarantee, as well as a crack down on Wall Street. Her ultra-progressive agenda has caught on in a district that is 75 percent non-white, according to U.S. Census data.
If Ocasio-Cortez wins in New York’s 14th district — which is traditionally blue — she would be the youngest woman elected to Congress.
Ocasio-Cortez began gaining traction about midway through the primary season. She released an ad online, produced by members of the Democratic Socialists of America, which garnered national attention.
“Women like me aren’t supposed to run for office,” she said.
She later told CNN that she thinks the people in New York’s 14th district feel left behind by the party, and that knocking on doors to talk to those who are too busy to vote or who may speak English as a second language really made a difference.
She’s made not accepting corporate money a cornerstone of her campaign, much like many other progressive candidates this cycle.
She’s raised just under $800,000 in the third quarter, mostly in large individual donations, according to FEC filings. ABC partner FiveThirtyEight forecasts the race as solid Democrat.
Copyright © 2018, ABC Radio. All rights reserved.