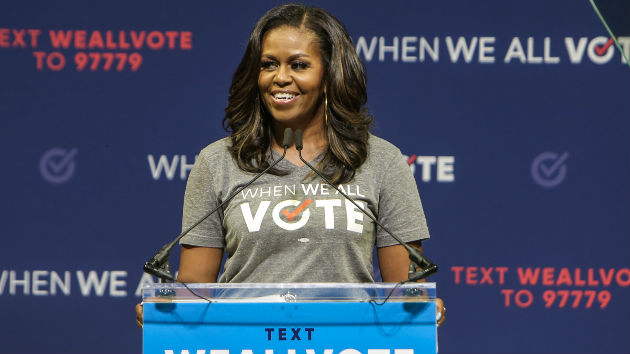 In addition to her upcoming Becoming book tour, which will feature the likes of Oprah Winfrey and Reese Witherspoon, Mrs. Obama's non-partisan, non-profit campaign When We All Vote is set to hold its first-ever Telethon For America next month.

According to Deadline, the telethon, set to stream live on YouTube, Facebook Live, and Comedy Central Online, has a goal of "raising zero dollars," and instead wants to take "pledges to increase voter turnout."

The event will air on November 5 and feature live performances, comedy, music, and pre-taped segments. It will also include a celebrity phone bank of stars who'll encourage fans and potential voters to vote in the midterms on November 6.

Some of the celebrity appearances will include Jane Fonda, Charlize Theron, Jessica Alba, Amy Schumer, Chelsea Handler and more.

Meanwhile, Mrs. Obama has booked an impressive lineup of moderators for her book tour which kicks off in her home town of Chicago on Tuesday, November 13. Oprah will moderate Obama's first conversation at Chicago's United Center.

The tour will also feature other notables including Phoebe Robinson, Tracee Ellis Ross, and Sarah Jessica Parker, who will moderate the last stop on December 19 in New York City’s Barclay Center.

And in even more Obama-related news, Barack and Michellehave lined up their first project for Netflix, after signing a production deal with the streaming site earlier this year. According to Entertainment Weekly, they have acquired the rights to Michael Lewis' book about the Trump administration, The Fifth Risk. They will reportedly be developing it into a series.