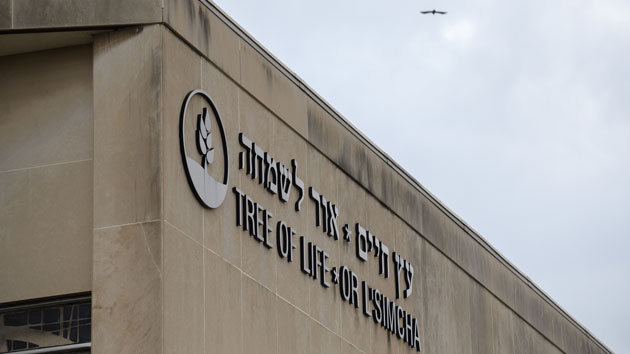 Jeff Swenson/Getty Images(PITTSBURGH)– The man accused of massacring 11 Jews in an anti-Semitic rampage at a Pittsburgh synagogue this weekend is still relatively unknown, but appears to be the textbook fit of what law enforcement experts consider the lone mass shooter profile.
Robert Bowers, 46, lived alone in the Pittsburgh area, and in the 18 months at his most recent home, neighbors said he was always by himself and never opened the blinds.
Bowers — who was taken into custody Saturday and is now being held in the Butler County Prison — never married and has no children. All neighbors, former neighbors or co-workers who spoke to ABC News described Bowers the same way: “quiet,” “kept to himself” and that “he looked very normal.”
A driver from B. Keppel Trucking, where Bowers used to work, didn't recall him, but described it as the kind of job where you didn't need to interact with your coworkers.
Bowers fits every characteristic of the lone mass shooter, according to ABC News contributor and former FBI agent Brad Garrett.
"Typically these mass shooters tend to be ghosts in their own communities," Garrett said. "Mass shooters tend to work alone, they tend to be paranoid, they tend to be somewhat delusional. They almost exclusively are completely isolated or mostly isolated from the rest of the world because they feel like they're on the outside of the world looking in."
"They tend to spend a lot of time online with like-minded individuals or groups that have a similar philosophy that they do," Garrett said.
Mass shooters also tend to feel "completely and utterly powerless," Garrett said, and think carrying out violence will give them power — at least for those few minutes.
Minutes before carrying out the carnage at the Tree of Life Synagogue Saturday, Bowers is believed to have posted his intent to commit the massacre on the social media platform Gab, which is popular with white supremacists and the alt-right, investigators said.
Prosecutors say Bowers — carrying an assault-style rifle and three handguns — "made statements regarding genocide and his desire to kill Jewish people" during the 20-minute attack.
As Bowers allegedly exchanged fire with officers, some of whom were injured, the gunman shouted to SWAT officers that he wanted "all Jews to die," authorities said.
Bowers was shot and hospitalized.
Authorities said he likely acted alone.
Bowers has no criminal history besides some minor infractions with police in Dormont, Pennsylvania, in the 1990s — and it appears he bought his guns legally, authorities said.
He was not on the radar of the FBI, authorities added.
“The most terrifying thing is how normal he seemed," said neighbor Chris Hall, who lives in the same Pittsburgh apartment building as Bowers.
Bowers was indicted on 44 counts by a federal grand jury in Pittsburgh, including 11 counts of obstruction of free exercise of religious beliefs resulting in death and 11 counts of use and discharge of a firearm to commit murder during and in relation to a crime of violence.
Copyright © 2018, ABC Radio. All rights reserved.