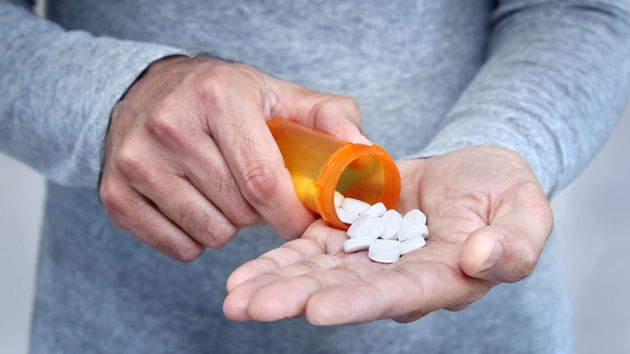 iStock/Thinkstock(NEW YORK) — An average of 115 Americans dies every day from an opioid overdose, according to the Centers for Disease Control and Prevention. Yet, despite a saturation of opioid drugs already on the market and a nation in the midst of an opioid crisis, a Food and Drug Administration advisory committee voted in favor of approving a new opioid, called Dsuvia, earlier this month.
It’s worth noting that the advisory panel’s vote does not mean that the drug has been FDA-approved. The FDA is expected to make its final recommendation on the drug by Nov. 3. However, experts have already weighed in to oppose the drug, including at least one senator and one member of the advisory board.
If you haven't heard of Dsuvia before, here are some things you should know.
What is Dsuvia?
Dsuvia is a tablet form of sufentanil that’s meant to dissolve under the tongue. It's 10 times stronger than fentanyl, an opioid drug already on that market that is 50 to 100 times more powerful than morphine. Fentanyl is also produced illicitly and is associated with many overdose deaths, often by those who are unaware that the opioids they're using contain fentanyl.
Dsuvia is intended for use with patients experiencing acute pain only in medically supervised settings, according to its makers.
Why was this drug developed?
The drug was developed to fulfill an unmet need, according to Dr. Pamela Palmer, anesthesiologist and chief medical officer at AcelRx, the maker of the drug.
“For acute pain management in a hospital, there hasn’t been a new opioid developed in many, many years,” she told ABC News. Right now, if you broke your femur and went into an emergency room, you would either have to be stuck with a needle or they would just give you an oral pill that you would swallow and kind of wait for it to kick in, which could take up to an hour.”
Palmer said there weren’t any opioids available that could dissolve under the tongue for patients who aren’t specifically diagnosed with cancer, experiencing pain, and tolerant to other opioids. “Dsuvia is indicated for… the management of acute pain severe enough to require an opioid analgesic and for which alternative treatments are inadequate,” she said.
Palmer also said that Dsuvia could help health care providers prevent dosing errors that can occur when administering liquid formulations of opioid medications.

What about concerns of abusing Dsuvia?
In addition to making the drug available only in medically supervised settings, AcelRx has other plans for preventing abuse of the drug, Palmer said.
“We have much stricter audits and monitoring and controls where we will have oversight from our manufacturers, from our distributors, wholesalers, all the way to the medically supervised setting,” she said.
The company also has a contract with Denver Health, which runs the RADARS system — a group of programs that are used to monitor prescription drug abuse, misuse and diversion.
But Dr. Raeford Brown, chair of the FDA advisory committee on analgesics and anesthetic drug products, told ABC News that he has significant concerns about the drug being approved.
“It doesn’t seem reasonable to place another potent opioid on the market at this time, especially when we’re currently still writing 200 million prescriptions for opioids a year,” said Brown, who was not present for the FDA vote. “The need to put a drug like this on the market is not demonstrated. The ability to manage that drug once it gets past the FDA is not demonstrated.”
“We know from looking at other potent opioids that have been put on the market in the last four years that once these drugs get past the FDA, there’s very little, if any, control over them, no matter what the sponsor says prior to the time they come on the market,” he added.
In a press release, Democratic Senator Ed Markey of Massachusetts also expressed concerns about Dsuvia’s potential impact on the opioid epidemic. Massachusetts has some of the highest opioid overdose rates in the U.S., according to the National Institutes of Health.
“An opioid that is a thousand times more powerful than morphine is a thousand times more likely to be abused and a thousand times more likely to kill,” Markey said. “Even in the midst of the worst drug crisis our nation has ever seen, the FDA once again is going out of its way to approve a new supercharged painkiller that would only worsen the opioid epidemic. It makes no sense to approve an opioid painkiller that has no benefits over similar medications and against the advice of experts.”
He added: "I call on the FDA to reject the vote of the advisory committee and stop the approval of this dangerously unnecessary opioid medication."
This article was written by Dr. Anna Jackson, a psychiatry resident at Vanderbilt University Medical Center and a member of ABC News' Med Unit.
Copyright © 2018, ABC Radio. All rights reserved.