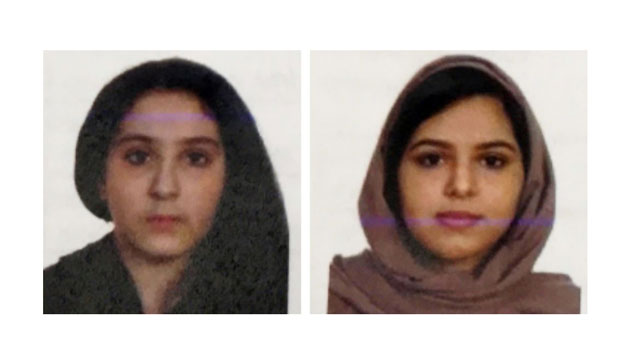 NYPD(NEW YORK) — New York City investigators believe that the two sisters from Saudi Arabia whose bodies were found bound together with duct tape floating along the Hudson River last week were alive when they entered the water, two police sources told ABC News.
Detectives are checking to see if any surveillance cameras captured the moment Tala and Rotana Farea entered the river. They are also trying to determine whether either of them had met with any counselors or therapists in recent weeks, the sources said.
The deaths are being investigated as suspicious, and there has been no determination on whether they are homicides, suicides or accidents, the sources said.
The medical examiner's office will ultimately determine the causes of death as the investigation continues.
Detectives have conducted various interviews in Fairfax, Virginia, where Tala and Rotana Farea had previously been living with family since 2015. Chief of Detectives Dermot Shea of the New York City Police Department said those interviews are "unraveling" what was going on in the sisters' lives before their mysterious deaths.
"I think we've made significant progress in piecing together pieces of this puzzle to find out what happened," Shea said at a press conference Wednesday morning, noting that investigators have already spoken to family members and other associates of the sisters to learn more about them.
"Those interviews are really unraveling, in some way, a piece of the puzzle of behind the scenes," Shea added. "There is still work to do."
Shea released new images of the Farea sisters, which he said were obtained with the cooperation of the family.
A passerby alerted authorities after spotting the bodies in the Hudson River off of Manhattan's Upper West Side on the afternoon of Oct. 24.
The women were found lying on rocks near the river, fully-clothed, both wearing black jackets with fur trim and black leggings. There were no obvious signs of trauma, police said.
The bodies are believed to have washed ashore with the tide and stayed when the tide went out, police said.
On Saturday, police identified the bodies as those of Tala Farea, 16, and Rotana Farea, 22.
The younger sister, Tala, had been reported missing on Aug. 24, according to the National Center for Missing and Exploited Children. That was the last time the two sisters were seen in Virginia, two police sources told ABC News.
It's unclear when the women arrived in New York and where they were staying, the sources said.
The Royal Consulate General of Saudi Arabia in New York confirmed in a statement Tuesday that the Farea sisters were students accompanying their brother in Washington, D.C.
The consulate said it has "appointed an attorney to follow the case closely," and that authorities "are following closely and constantly for details on the case including the forensic reports showing the causes of death which have not yet been finalized and is still under investigation."
Anyone with information about the Farea sisters is urged to call the New York City Police Department's Crime Stoppers hotline at 1-800-577-TIPS.
Copyright © 2018, ABC Radio. All rights reserved.