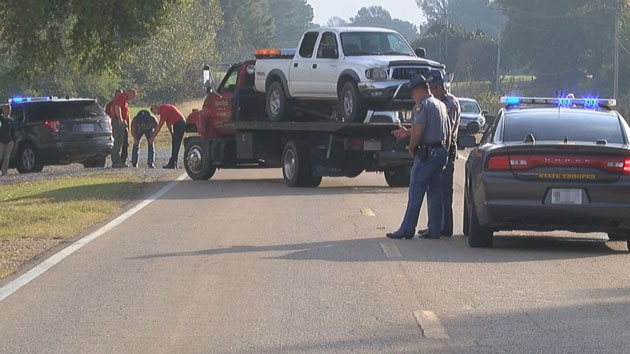 WTVA(MEMPHIS, Tenn.) — A child has died after he was hit by a pickup truck as he was about to board a school bus on a Mississippi highway.
Lee County Coroner Carolyn Green identified the child as 9-year-old Dalen Thomas.
Authorities in Lee County are investigating the incident that occurred on Highway 370 at around 7 a.m. Wednesday morning, according to ABC Mississippi affiliate WTVA.
Thomas was taken to Le Bonheur Children's Hospital in Memphis, Tennessee, where he later died, according to Green.
ABC News has reached out to the Mississippi Department of Public Safety, but they did not return a request for comment.
State troopers said Thomas was a student at Baldwyn Elementary School, according to WTVA. When they arrived at the scene it appeared the driver of a westbound Toyota pickup truck struck the child as he was crossing the road to get onto the school bus, according to WTVA. The driver has been cooperating with authorities.
"The bus was properly stopped when a truck hit the student," Baldwyn School District Assistant Superintendent Raymond Craven told WTVA. "We are asking for prayers for the family and for the school."
"We are working with law enforcement to investigate the accident. The safety of our students will always be the number one concern," Baldwyn School District Superintendent Jason McKay told WTVA.
ABC News reached out to Baldwyn Elementary School, but they did not respond to a request for comment.
Four other students were on the school bus at the time of the incident, Mississippi Highway Patrol told WTVA. The school district made arrangements to get the other four students to school after the accident.
Copyright © 2018, ABC Radio. All rights reserved.