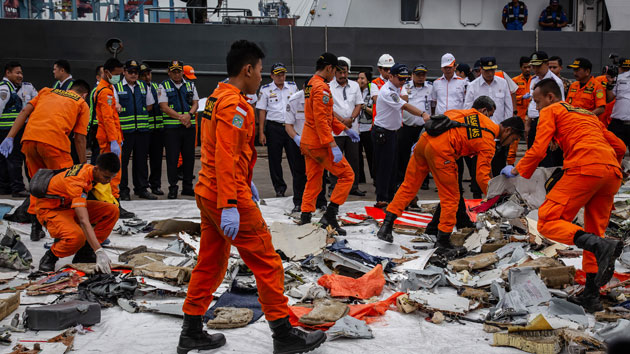 Ulet Ifansasti/Getty Images(JAKARTA, Indonesia) — Representatives from Boeing, the manufacturer of the ill-fated Lion Air 737 that crashed Tuesday in the Java Sea and presumably killed all 189 people on board, have arrived in Indonesia to gather information and assist in the investigation.
Soon, investigators from the National Transportation Safety Board will join the probe.
The American presence in Indonesia is focused on uncovering any potential problems with the 21st-century aircraft. The Boeing 737 MAX 8 is the manufacturing giant's best seller and one of the most recent versions of the 737, considered the workhorse of the U.S. aviation system.
As experts in Indonesia scramble to find the black box buried at sea, are there more answers already back in the United States?
This aircraft type has a high-tech data system designed to send hundreds of gigabytes worth of information to the ground as it flies, including flight deck displays, maintenance data, software information and engine health.
It's called the Onboard Network System and every MAX 8 has a server installed in the aircraft, according to an article posted on Boeing's website.
Boeing, the airline carrier and CFM — the engine maker on the MAX 8 — would typically receive this data.
But it's up to each airline to decide to "subscribe" to the data downloads. It remains unclear whether or not Lion Air subscribes to the downloads. An airline representative did not immediately respond to an ABC News request for comment.
A Boeing representative declined to comment on whether or not Boeing successfully received data from this flight.
A representative of General Electric, which partially owns engine maker CFM, also declined to answer the question.
In 2014, Rolls Royce, another engine maker, was getting data from Malaysian Airlines Flight 370 as it flew astray over the Indian Ocean; even though Malaysia Airlines was not a subscriber.
That aircraft and its 239 people on board are still missing.
Copyright © 2018, ABC Radio. All rights reserved.

Teen is first Black valedictorian in her school’s 152-year history
Black women turn to doulas as maternal mortality crisis deepens
Search effort underway for missing LSU student whose car was found on Mississippi River bridge
“Black Adam ready”: The Rock says DC superhero pic prod starts this week, and proves he doesn’t skip leg day
COVID-19 origins: What to know about the search for the start of the virus
Regé-Jean Page is “hurt” over reports he was denied DC role because he’s Black