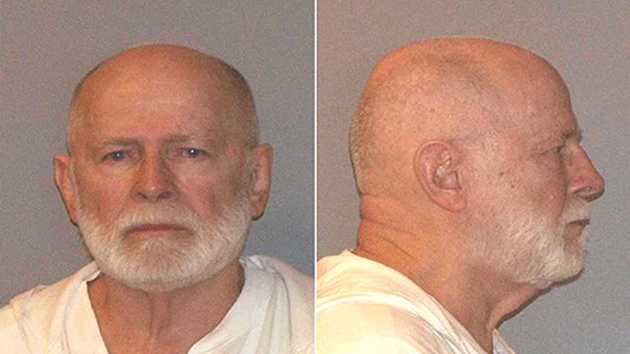 Bureau of Prisons/Getty Images
Posted on October 30, 2018 by ABC News

The FBI and the U.S. Attorney's office for the Northern District of West Virginia are investigating the death as a homicide, said the official who was briefed on the probe.

Details of how Bulger was slain were not immediately released.

Life-saving measures were initiated on Bulger, 89, after he was found at 8:20 a.m. at the high-security Hazelton federal prison in Bruceton Mills.

The U.S. Department of Justice noted in a statement that "no staff or other inmates were injured" as a result of Bulger's killing.

Bulger — once head of the group of Irish mobsters dubbed the "Winter Hill Gang" in South Boston — died a day after he was transferred to the Hazelton prison for undisclosed medical reasons after a brief stay at the federal lockup in Oklahoma. Up until recently, he had been serving his life sentence at a federal prison in Sumterville, Florida.

"We received word this morning about the death of James 'Whitey' Bulger. Our thoughts are with his victims and their families," Andrew Lelling, the U.S. Attorney for the District of Massachusetts, said in a statement.

Steve Davis — whose sister, Debra Davis, was strangled by Bulger in 1981 — told ABC affiliate station WCVB-TV in Boston that he couldn't believe Bulger was dead.

Bulger was convicted in 2013 of murdering 11 people, as well as extortion, money laundering and weapons charges.

The trial came nearly 20 years after he went on the run after being tipped off to a pending federal indictment by a corrupt FBI agent.

"I was proud to be appointed by the Federal Court to represent James Bulger," the gangster's attorney, J.W. Carney, Jr., of Boston said in a statement. "He was sentenced to life in prison, but as a result of decisions by the Federal Bureau of Prisons, that sentence has been changed to the death penalty. I'll have no further comment."

Bulger spent 16 years on the lam and was arrested in 2011 in Santa Monica, California, where he was living in a rent-controlled apartment with his longtime girlfriend, Catherine Greig.

Before his capture, Bulger was second only to Osama Bin Laden on the FBI's Most Wanted List.

Bulger is the brother of William Bulger, the former president of the Massachusetts State Senate.

Nicknamed "Whitey" for his shock of white hair, Bulger and his gang ruled South Boston for decades and were engaged in illegal gambling, extortion, drug dealing and loan sharking as well as murder, law enforcement officials said.

An infamous underworld figure, Bulger was the subject of several books, including the 2000 bestseller "Black Mass" which was turned into a feature film in 2015 in which actor Johnny Depp portrayed Bulger.