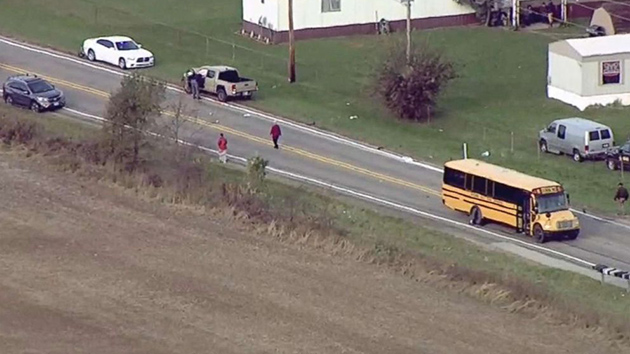 WLS(ROCHESTER, Ind.) — Three children from the same family were killed and a fourth child was seriously injured Tuesday morning when they were struck by a pickup truck as they were about to board a school bus, police said.

Identical twin 6-year-old brothers, Xzavier and Mason Ingle, and their 9-year-old sister Alivia Stahl were killed in the incident on a rural road in Indiana, said Sgt. Tony Slocum, the public information officer for the Indiana State Police.

The incident occurred around 7:15 a.m. in Rochester, a city near Fort Wayne, Slocum told reporters at the scene. The injured boy was taken to a Fort Wayne hospital by helicopter.

"Our hearts just break for the families involved here in this tragic situation, and our prayers obviously go out to them," Slocum said. "It was a tough day to watch the emotions that these family members had to go through and a tough day for first responders. It's been a while since I've seen first responders cry, but I saw some tears shed today because that's what the situation dictated."

The four children were crossing a two-lane road from a mobile home park to get to their school bus when they were struck by a Toyota Tacoma truck, police said. A preliminary investigation showed the yellow school bus was in the northbound lane of State Road 25 with its emergency lights flashing and its stop-sign arm out when the children were struck by the southbound truck, Slocum said.

The driver of the truck, 24-year-old Alyssa Shepherd of Rochester, stayed at the scene and has been cooperating with police, said Slocum. As of Tuesday afternoon, she had not been charged with any crimes, but Slocum noted that the investigation was in its preliminary stage.

ISP is investigating a fatal crash in Fulton County. Preliminary info is three children were struck & killed at a school bus stop near 4600 N State Road 25. @ISPPeru PIO Sgt. Tony Slocum is at the scene. Updated and confirmed info will be sent via news release later today.

He also said relatives of the children immediately became aware of the tragedy and identified the children's bodies at the scene.

"We don't know why this crash happened as we speak here right now," Slocum said.

Aerial photos from ABC affiliate WLS-TV in Chicago showed a pickup truck with heavy front-end damage at the scene.

The Tippecanoe Valley School Corporation posted a statement on Facebook after the incident.
"Our school corporation has suffered a tragedy this morning. We have learned of three student fatalities and one student seriously injured and airlifted to a Fort Wayne hospital as they were hit by a vehicle while boarding their bus. We have deployed all school counselors to meet the emotional needs of our staff, students and parents," the school wrote on Facebook. "We are awaiting to learn more confirmed details but wish to ask the community to come together to pray for the families, our students and our staff."