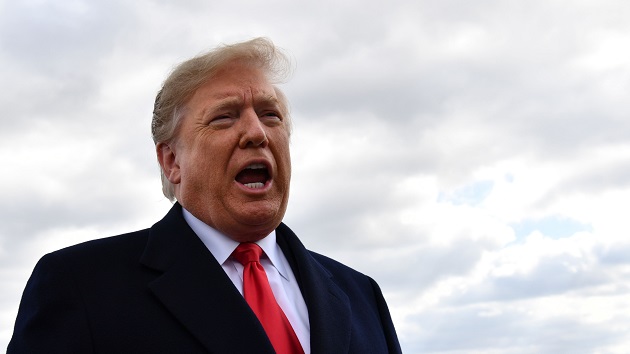 President Donald Trump, returning to one of his presidential campaign themes, said in an interview that he plans to use an executive order to end citizenship rights for babies born in the U.S. to parents who aren’t citizens.

But his idea that he could do so by executive order was immediately opposed by Democrats, legal scholars and even a fellow top Republican, House Speaker Paul Ryan.

"We're the only country in the world where a person comes in and has a baby, and the baby is essentially a citizen of the United States … with all of those benefits," Trump told Axios in an interview that aired Tuesday. "It's ridiculous. It's ridiculous. And it has to end."

"It's in the process. It'll happen … with an executive order,” the president said.

Trump is incorrect in arguing that the U.S. is alone in extending citizenship rights to the children of undocumented immigrants. More than 30 other countries, including Canada and most South American nations, similarly grant citizenship to children born within their borders.

It's also unclear if birthright citizenship can be ended through an executive order and without a change to the Constitution, as the president claimed.

This is not the first time Trump has called for ending birthright citizenship. It was part of his hard-line immigration platform during the presidential campaign, during which he frequently used the term "anchor babies" to describe children born to undocumented immigrants in the U.S.

"The birthright citizenship, the anchor baby … it's over, not going to happen," Trump said in a November 2015 speech in Orlando. Trump has continued to use the term, which some find offensive, despite push back. In 2015, when a reporter asked then-candidate Trump if he knew it was offensive to call children born in America to undocumented parents "anchor babies," Trump said "everybody uses it" and that he would continue to do so.

His return to the issue comes just a week before the midterm elections, at a time when the president has hammered hard on the topic of immigration, including referring to a Central American migrant caravan slowly making its way north through Mexico as an invasion.

The White House did not immediately respond to requests for comment from ABC News on Tuesday about how a potential executive order might approach the issue. Such an order would almost certainly be challenged in the courts.

Ryan pushed back against the president's renewed interest in ending birthright citizenship through an executive order, asserting the power to change the law would rest in Congress, not the White House.

“What is very clear is you can’t change this via executive fiat,” Ryan, R-Wis., said. “At the very least, it would have to be statutory through Congress, but I still think a plain reading of the Constitution is fairly clear.”

During an interview with WVLK-Radio, Ryan emphasized that Trump “cannot end birthright citizenship with an executive order." "You know, as a conservative, I'm a believer in following the plain text of the Constitution, and I think in this case the 14th Amendment’s pretty clear,” Ryan said.

Some Democratic lawmakers, including Sen. Amy Klobuchar, D-Minn., were quick to paint the president's comments as a political play to his base.

"He'll say anything before the election," Klobuchar tweeted. "Don't take the bait."

The U.S. government has interpreted the wording of the 14th Amendment to mean that children born in the country, even to parents who are undocumented, are citizens, according to a FactCheck.org article from 2015.

Trump maintained in 2015 that Congress could end birthright citizenship with a simple bill clarifying the 14th Amendment. A small group of legal and constitutional experts agreed with him, according to FactCheck.org.

But in the interview that aired Tuesday, he told Axios he believes birthright citizenship could be ended by executive order.

"It was always told to me that you needed a constitutional amendment," the president said in the interview. "Guess what? You don't."