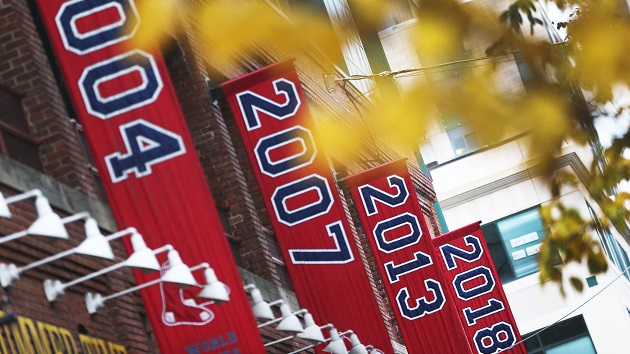 Michael Swensen for The Boston Globe via Getty Images
Posted on October 30, 2018 by ABC News

Michael Swensen for The Boston Globe via Getty Images(BOSTON) — The Boston Red Sox are back home after defeating the Los Angeles Dodgers in five games to become the World Series champions.
The team arrived at Fenway Park, along with their championship trophy, Monday night, and were greeted by fans and camera crews, ESPN reports.
The Red Sox beat the Dodgers 5-1 in Game 5 of the World Series Sunday night to clinch the title — the team's fourth since 2004.
A championship parade will be held for the Red Sox in Boston Wednesday morning.
Copyright © 2018, ABC Radio. All rights reserved.