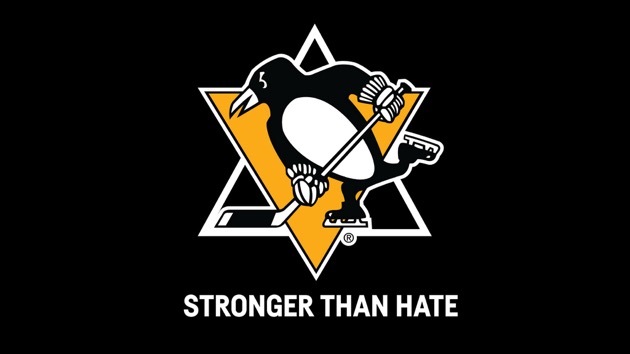 Pittsburgh Penguins(PITTSBURGH) — The Pittsburgh Penguins have found a special way to honor the victims and families impacted by the shooting Saturday morning at Tree of Life synagogue.
Penguins players will wear special "Stronger Than Hate" patches on their jerseys when they hit the ice Tuesday night against the New York Islanders at PPG Paints Arena. The team will later sign the game jerseys, which will be up for auction after the game at treeoflife.givesmart.com.
The Penguins organization says it plans to combine the auction proceeds with other fundraising efforts to benefit the Jewish Federation of Greater Pittsburgh and a fund established by the City of Pittsburgh Department of Safety to benefit police officers wounded during Saturday's attack. The Penguins will donate an additional $50,000 to both funds.
The jersey auction, underway since Tuesday morning, will continue until Nov. 13 at noon EST. Fans at Tuesday night's game can also donate at all three entrance gates. The team says online donations can be made at treeoflife.givesmart.com.
The Penguins v. Islanders game starts Tuesday at 7 p.m. EST.
Copyright © 2018, ABC Radio. All rights reserved.