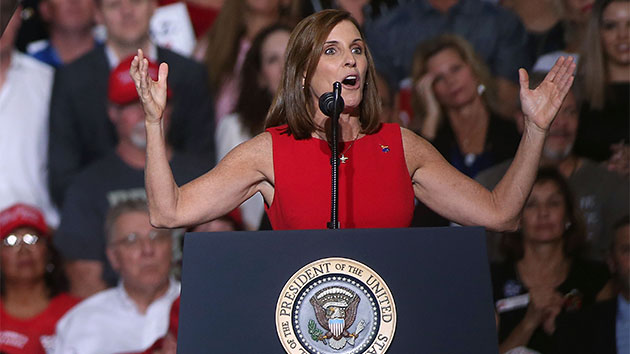 Ralph Freso/Getty Images(WASHINGTON) — Martha McSally is fond of making comparisons between the campaign trail and her time fighting in the Air Force.

She uses militaristic language in her speeches, likening parts of the campaign to air wars and ground wars, and talking about her current "deployment" in Washington.

And now, she's in the battle to win the open Senate seat in Arizona, which many are watching as a critical election that could determine which party controls the Senate.

McSally, 52, sees the seat as a potential, pivotal form of protection for President Donald Trump's agenda.

"I’m really the firewall to make sure that we keep and grow the Senate majority. So it’s high stakes for our country," McSally told ABC News in early October.

Given the close nature of the race against Democratic Rep. Kyrsten Sinema and the recent state-wide polling that has the race within the margin of error, it seems that the stakes couldn’t be higher.

Born in Rhode Island, the youngest of five children, McSally faced some difficult times in her childhood as her father died when she was young.

"In 24 hours when I was 12 years old, everything changed. We went from a day of spending time with family, to him not feeling well, to going to the hospital. He had had a heart attack," she said during his primary night acceptance speech.

She cited her father, who served in the Navy, and her promise to make him proud as part of the driving force behind her military career.

McSally joined the Air Force, working her way up over more than two decades to become the nation’s first female fighter pilot to serve in combat.

An early somewhat political battle came before she entered politics, when she sued the Department of Defense and challenged the then-policy that told American women to wear a traditional abaya, which covers one's body, while stationed in Saudi Arabia.

"I call that the burka battle," McSally said in her primary night speech, noting that she fought for it "because I was raised to believe a woman should be treated equally and you can't keep a girl down."

The policy was changed in 2002, making it so that service women were not required, but encouraged to wear an abaya while off base, though a spokesperson for Central Command said it was not a result of the lawsuit but that it had already been "under review."

She was promoted to the rank of lieutenant colonel in 2004 and retired from active duty in 2010.

Her military experience has played a prominent role in her latest political campaign, with Trump noting her service in an email that he sent to supporters before he campaigned for her in Arizona.

But it's also present in the details, like the silver pendant of an A-10 "Warthog" plane, the model which she flew during her service, that she wore during the Senate race's sole debate.

"I have and [have] always been true to who I am, and I've spent my life in service to our great country," she said in her primary night speech.

After a failed bid for a House seat in 2012, McSally ran and won the 2014 race for Arizona's 2nd Congressional District, a traditionally Democratic district along Arizona's southern border. It was a very close race. A recount declared McSally the winner by 167 votes.

She was re-elected in her district, which includes parts of Tuscon, in 2016 and decided to run for the Senate seat that is being left open by Sen. Jeff Flake's decision not to seek re-election.

Flake has said, including during a recent appearance on "The View," that the fact that he felt that he, as a critic of Trump, would not be able to win a Republican primary in his home state was part of the reason why he didn't run again.

Support for Trump did play an outsize role in the primary, where McSally regularly touted her work with the president as she tried to fight off two fellow conservative Republicans, former Sheriff Joe Arpaio and former State Senator Kelli Ward.

McSally won the primary with 52.9 percent of the vote, and earned the much-coveted tweet of endorsement from Trump after the results were confirmed.

Big issues and talkers of the race

McSally has leaned on her experience — both in terms of her military service and her time serving as a congresswoman for a border district — during the campaign when talking about topics like immigration, border issues and the military.

She has also spoken regularly about her dedication to veterans, though military ties have been a talking point for both the McSally and Sinema campaigns.

Healthcare, and Obamacare specifically, has become a big part of the Arizona race, with both sides accusing the other of either adopting the wrong approach or voting against pre-existing conditions.

While the issues are central to voters, frequent and damning negative attack ads have also colored the race.

McSally fired off one of the campaign's most memorable ads, where she highlighted how Sinema protested the War in Iraq in a pink tutu while McSally was serving in uniform.

Since then, McSally has pounced on clips of old interviews and speeches where Sinema is seen calling Arizonans “crazy,” likening Arizona to a “meth lab of democracy,” and suggesting, as part of a hypothetical exchange, that she wouldn’t care if Americans joined the Taliban. Another low point in the campaign came when a political action committee that supports McSally sent out a mailer to voters that appeared to suggest that Phoenix could be the target of a nuclear bomb if Sinema were to win.

Sinema has brushed the negative ads aside, saying at their debate that McSally’s claim that it was Sinema who made a treasonous statement was “ridiculous.”

“Martha has chosen to run a campaign… where she's engaging in ridiculous attacks and smearing my campaign,” Sinema said.

Big names on the trail

Following the Aug. 28 primary, McSally has had a string of high-profile Republicans flying in to support her bid.

Trump headlined several events in the state, topping it off with a rally. That same day, former President George W. Bush held a closed-door fundraiser for her in Arizona. Less than a week later, Vice President Mike Pence rallied for McSally in Yuma and Sen. Lindsey Graham, R-S.C., flew in to stump for her the same weekend.

While national names are inevitably helpful to a campaign, it's the voters on the ground who really count, and the polls have been exceptionally close throughout.

The latest NBC News/Marist poll, released Tuesday Oct. 30, has McSally trailing Sinema by six points, though that is still within the margin of error.

While McSally has been casting herself as a Trump-backing conservative and her opponent a far-left radical, a review of their records paint a picture that is less extreme, at least on Sinema's end.

According to ABC News' partner 538, Sinema has voted with the Trump administration the highest percentage of any Democrat in Arizona, 60.9 percent of the time, including on some legislation which earned liberal ire, such as the effort to roll back parts of the banking bill Dodd-Frank.

That said, the same congressional tracker reports that McSally voted with Trump 97.8 percent of the time.

McSally defended her support of Trump to ABC News in early October.

"This is a historic opportunity to partner with the president to move opportunities forward and to keep our country safe and secure. That’s what Arizonans want and I’m going to continue to do it in the Senate," she said.