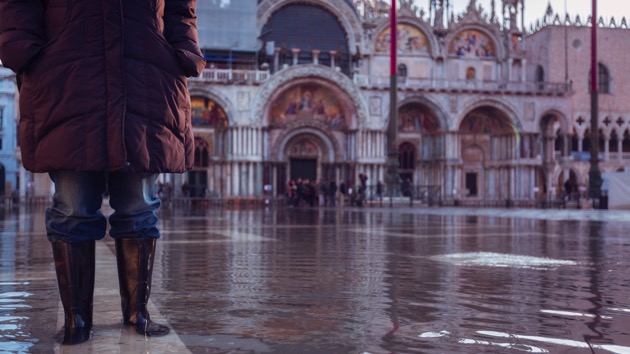 iStock/Thinkstock(VENICE, Italy) — Fierce storms moving through Italy are forcing schools and popular tourist sites to close and leaving fatalities in its wake.
Strong winds at reported speeds of up to 110 mph and tornadoes tearing through western Italy left one person dead and injured 10 others, BBC reports. Landslides and fallen trees have also contributed to the rising number of deaths.
In the North, canal flooding has submerged as much as 75 percent of Venice. St. Mark's Square, where travelers to Venice typically gather for photos and tours, was forced to close Monday. The water levels there had reached over five feet — the fourth highest level ever recorded, according to BBC.
A total of six people were reported dead across Italy Monday, with the number of storm-linked deaths rising on Tuesday.
BBC reports western Italy may have seen the worst conditions. Trees were reportedly down in the capital city of Rome, and residents farther south in Terracina ran for cover as tornadoes tore through the region.
As many people are still dealing with transportation and power disruptions, meteorologists say the extreme weather won't likely cease any time soon.
Copyright © 2018, ABC Radio. All rights reserved.