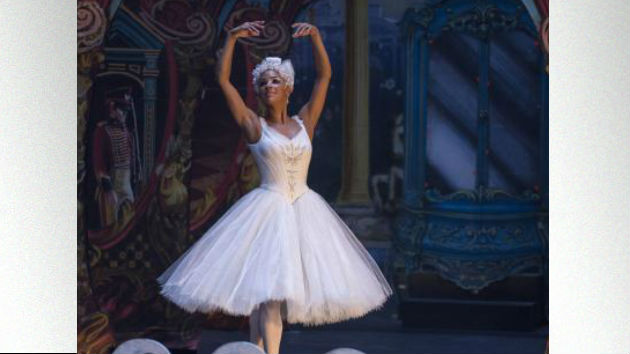 Disney(LOS ANGELES) — The Nutcracker and the Four Realms had its world premiere Monday night in Hollywood. The film, released by ABC News' parent company Disney, is an epic twist on the holiday classic ballet.

Young Twilight alumna Mackenzie Foy stars as Clara, who comes across a mysterious nutcracker that leads her on an epic adventure. On the red carpet, she told ABC Radio that the movie is at once more traditional and more unique than the story you may know: "[T]his film is based on the original book by E.T.A. Hoffman, but it also draws inspiration from the ballet, so you have those two sides that a lot of people know, and a lot of people love, kind of combined. And then it also has a couple of twists and turns." She adds, "It's very action packed."

Speaking of ballet, on the red carpet ABC Radio spoke with Misty Copeland, who plays the Ballerina Princess in the film. In real life, Copeland made history as the first African American female Principal Dancer with the prestigious American Ballet Theatre.

By starring in Nutcracker, she tells us she's still blazing ground. "To be a brown ballerina that will live on this film and that the next generation can look at me and say, 'that's what a ballerina looks like.' …[T]hat's important."