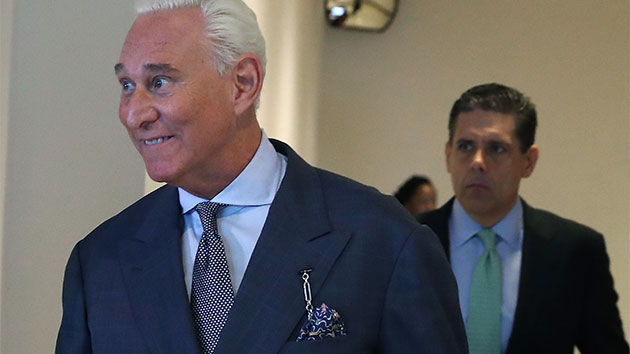 Mark Wilson/Getty Images(WASHINGTON) — Longtime Republican political operative Roger Stone is gearing up for battle with special counsel Robert Mueller after a parade of witnesses has appeared before a grand jury to be grilled about their relationship with Stone during critical moments of the 2016 presidential campaign.

Sources tell ABC News that Stone, a longtime friend of President Donald Trump, quietly expanded his legal team in recent months, hiring prestigious Florida attorney Bruce Rogow, who will be Stone’s lead attorney on all matters related to the office of the special counsel and all constitutional matters, such as first amendment issues that may arise.

In the past, Rogow has represented President Donald Trump's golf club interests in a handful of civil matters out of Florida over the past 20 years. His over 50-year career in litigation includes eleven cases in the U.S. Supreme Court.

“Mr. Robert Buschel and I welcome the presence of someone with Mr. Rogow’s stature and gravitas," another Stone lawyer, Grant Smith, told ABC News of Rogow joining he and Buschel on the Stone legal team.

Rogow told ABC News on Tuesday that the veteran GOP political operative has still not been contacted by the Office of Special Counsel.

Stone’s legal team tells ABC News that last month their client voluntarily took two polygraph tests, which they claim will show Stone passing with flying colors on a spectrum of key issues covering areas of interest in the Mueller probe related to Stone.

According to the Department of Justice, both the Federal Rules of Evidence and U.S. Code do not have a specific provision about the admissibility of polygraph test results in a trial, but the department cites many examples in which polygraphs are found inadmissible.

The questions included whether Stone communicated with Julian Assange during the 2016 presidential election and whether he ever discussed at any time the stolen information from Wikileaks and with Donald Trump during that time, all to which Stone replied, “no.”

"I suggested a polygraph in order to pin down the veracity of Roger's positions on the investigation by the special counsel with regard to Julian Assange and Wikileaks," Rogow told ABC News on Tuesday. "I have great confidence in the polygraph examiner, to whom I sent Mr. Stone."

Nearly a dozen individuals associated with Stone have met with the special counsel since last summer and many of those have appeared before a grand jury impaneled by Mueller’s team. The witnesses have told ABC News they were asked about Stone’s dealings during the 2016 election and what if any contact he may have had with Wikileaks founder Julian Assange through an intermediary, which Stone denies.

The special counsel’s newest cooperating witnesses – former Trump campaign chairman Paul Manafort – has been asked about his friend and former business associate, according to multiple sources familiar with the matter.

The development comes as ABC News learns Mueller’s team is interested in examining tapes of a series of conference calls hosted by Roger Stone in 2016 during which he allegedly made comments about Wikileaks, a source with direct knowledge tells ABC News.

The news was first reported by the Wall Street Journal.

In an invitation from Aug. 4, 2016, Stone – marketing himself as "the ultimate political insider" invited participants to take part in a bi-weekly open conference call advertised on Stone's various social media accounts. Jason Sullivan, Stone's former social media adviser who testified before Mueller's grand jury over the summer, helped coordinate and emcee, according to a source.

A lawyer for Sullivan, Knut Johnson, declined to comment on the matter.

Sources have told ABC News that, as of yet, Mueller’s team has been unable to acquire the complete recordings of those tapes.

"Mr. Stone is confident that the transcripts of whatever recordings may be out there are 100% consistent with his sworn testimony and both his public statements at the time, and subsequent clarifications of the same,” Grant Smith, Stone’s attorney told ABC News.

In rare instances, South Africa variant may evade Pfizer vaccine, researchers say
George Floyd’s brother testifies in ‘spark of life’ phase of Derek Chauvin murder trial
CW releases first official photo of its ‘Powerpuff Girls’ cast in costume
Ex-Chiefs assistant coach Britt Reid charged in crash that injured 5-year-old girl
A Goodwill employee finds $42,000 in a pile of donations
“You don’t want to do this”: Bucky and Sam face off against the new Cap in ‘The Falcon and The Winter Soldier’ preview