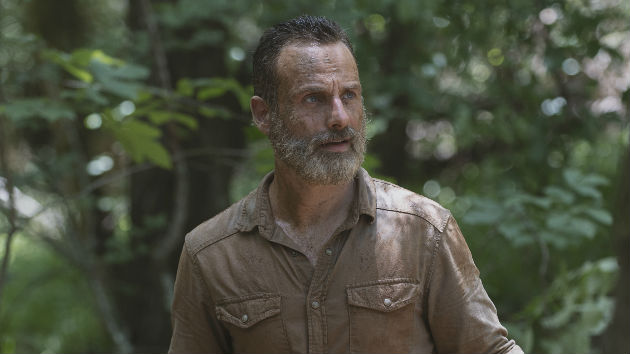 AMC/Gene Page(NEW YORK) –(SPOILERS AHEAD) Sunday's episode of The Walking Dead starts on Michonne, this time up before Rick, who woke before her last week. In a musical montage, she goes about her business as the Alexandrians go about theirs; she's working on drafting the community agreement in her spare time.

She's restless. Misses the hunt. At night, she picks up her katana and gets a workout in on some walkers. It becomes a nightly ritual.
One night, as she ponders a lynched walker, she's surprised by another. Disarmed. She grabs what's handy in a pile of junk. It's a bat she uses to bash the walker's brains in.
Then it reminds her of the obvious: Negan and his bat Lucille. Repulsed, she slinks away.
At Hilltop, Maggie is with baby Herschel, looking over her community.
She gathers up her things, including a crowbar. Jesus sees it, and knows she's headed to Negan. He tries to stop her from doing what she did with Gregory — and the mistake Rick made sparing Negan: taking matters into her own hands without consulting others.
At Alexandria, Eugene tells Rick the bridge project isn't going well — and Carol tells Rick she's off to the Kingdom, leaving Sanctuary to fend for themselves.
Jerry gallops in to warn Rick that Maggie's off to Alexandria — Rick warns the gate to stall her before she gets to see Negan. Daryl offers to drive Rick there.
At Alexandria, a woman, Nora, warns Michonne that Negan, still behind bars, is refusing to eat.
Meanwhile, Daryl deliberately takes Rick the wrong way, stalling him. Rick catches on. Daryl tells him, "this time it's going to go the way it was supposed to." They scuffle, and end up rolling into a sinkhole.
Meanwhile, at Alexandria, Michonne herself brings Negan food. "The hunger strike ends tonight."
"It's not a strike. It's me not in the mood to eat." He bargains with her to stay and talk to him if he eats. She accepts.
Back in the ditch, Daryl tells Rick that Oceanside killed the Saviors. Rick insists that if Negan gets killed, then he becomes a martyr, "Everybody died for nothing. Carl died for nothing!"
In the cell, Negan is working Michonne, sharing that the loss of his wife made him stronger, like the deaths of her loved ones. "We were built for more," he tells Michonne. "Out there, it's is like an addiction. I know what you know what I'm talking about."
He explains his wife's death liberated him, like the death of Michonne's son did for her. Insulted, she flings the food and storms out.
At the Scavenger hideout, Anne has Fr. Gabriel tied up, like she did Negan last season, with a walker ready to get at him. "I failed you," he says, "and I forgive you, Anne, whatever you have to do." She lowers the walker but can't bring it to let it bite him. Instead, she smothers him until he passes out.
Meanwhile, Carol and her folks are locking up weapons when Jed and a band of Saviors set upon them, looking to steal their weapons. Jed manages to get her to lower her gun, but it was a feint — she kicks him and shots are fired, drawing the attention of Rick and Daryl, who aren't far away. They struggle to get out of the hole.
Back at Alexandria, Michonne gets back into the jail with Negan, and insists she's not like him — which he realizes touched a nerve. He finally takes a bite…and he asks to see Lucille. "I need to see her," he whimpers, tearfully.

She insists Lucille was left to the elements and leaves him to his misery. Negan starts bashing his head against the wall.
Meanwhile, walkers drawn by the gunfire start falling into the hole. Daryl dispatches them before using their bodies as a stepladder. More fall in, meaning any slip will send him into their hands. Rick manages to get to firmer terra and and helps Daryl up.
They split up, with Rick taking a horse to lead the horde away, and Daryl taking to his bike to try to help Carol's camp.
Back at the Scavenger camp, Gabriel awakes to find Anne has abandoned him; he falls to his knees.
Rick, on horseback, finds he's trapped between two walker herds. His horse throws him, and he screams: he's pinned to a block of concrete, impaled through the back by rebar. As walkers converge around him, he passes out.

What the 1st fundraising quarter signals about 2022 Senate map
What we know about the fatal police shooting of 13-year-old Adam Toledo
John Corbett confirms he’s on board for ‘Sex and the City’ reboot
Lord of Cha-Ching: Report says Amazon paying $465 million for one season of ‘Lord of the Rings’ series
Mom warns COVID-19 is still ‘serious’ as her 1-year-old fights the virus
NC police warn LGBTQ community after transgender women shot dead in hotels miles apart