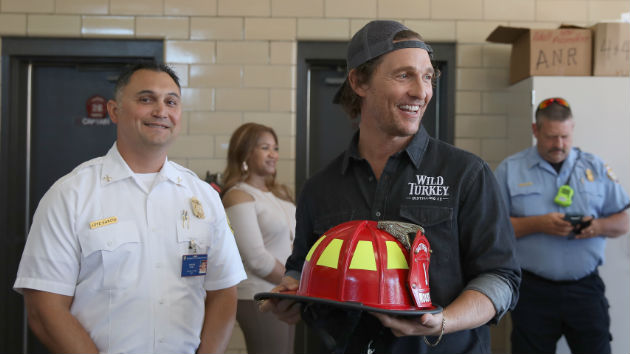 In honor of National First Responders Day Saturday, the actor visited with police officers, firefighters, 911 operators and emergency room doctors and nurses who all made a difference during last year's Hurricane Harvey. He also treated them to turkey dinners as a way of thanking them for their services.

The first responders were honored as part of the annual Wild Turkey Gives Back campaign, sponsored by the bourbon brand Wild Turkey, for which McConaughey serves as creative director.

“I’m Texas born and raised, so acknowledging the hard work and dedication of first responders in Houston is meaningful to me personally,” McConaughey says in a statement.

He adds, “Over the past year alone with the hurricanes in Puerto Rico, the Carolinas and Florida and the fires in California, the number of heroic men and women on the front lines of natural disasters is staggering. I am glad to make it to Houston to recognize how important these folks are and I am proud to work with Wild Turkey, who is making first responders a key focus of its Wild Turkey Gives Back campaign for 2018.”

The bourbon brand has also made a donation of $10,000 to Team Rubicon, a disaster response organization that trains and deploys military veterans and first responders to communities affected by natural disasters. Wild Turkey is encouraging others to contribute at TeamRubiconUSA.org/Wild-Turkey.