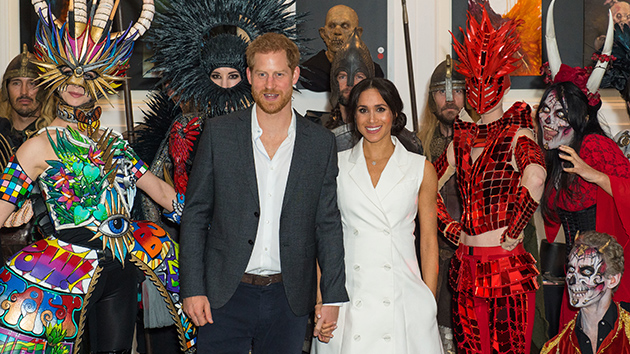 Dominic Lipinski – Pool/Getty Images(NEW YORK) — All eyes are on Meghan Markle as she and her husband, Prince Harry, undertake a 16-day tour of Australia, New Zealand, Fiji and Tonga.
The couple will attend more than 70 engagements over the course of their four-nation tour.
For Meghan, who is expecting the couple's first child, that means possibly the same number of outfit changes.
The duchess, whose every fashion move is closely watched, was joined for part of the Down Under tour by Jessica Mulroney, her close friend and style adviser.
It was Mulroney, who lives in Toronto, who helped Meghan plan her wedding and who has assisted in styling some of her biggest fashion moments since becoming a royal. Mulroney and her husband, Ben Mulroney, the parents of three children, arrived in Australia on Monday, according to her Instagram stories.
Check back here over the next two weeks as "Good Morning America" tracks all of Meghan's fashion choices during the royal tour Down Under.
Wellington, New Zealand
Meghan chose a custom white blazer dress to meet with young students and professionals working in Wellington's film and creative industries. The "Leap of Faith" dress is by Maggie Marilyn, a New Zealand fashion brand that launched in 2016.
A version of the "ethically made" dress, which Meghan wore as sleeveless, is available for preorder on the brand's site for $1,020.
Sydney, Australia

Meghan wore a magical Oscar de la Renta gown to the Australian Geographic Society Awards in Sydney.
She and Harry presented young people with awards at the event, an "annual gathering of Australia's brightest and best in exploration, science and conservation," according to Kensington Palace.
Tonga

Meghan began her last day in Tonga wearing a sleek pony tail and a striped dress by Australian designer Martin Grant.
She later changed into a blue Veronica Beard dress for an engagement at the Tongatapu and ‘Eua National Park Reserve.
Meghan also wore the dress as she and Harry board their charter flight back to Sydney.
Tonga

Meghan stunned in a white formal gown by Theia at an official dinner hosted by King Tupou VI and Queen Nanasipau’u.
She accented the gown with a Givenchy clutch and a very personal accessory, an aquamarine ring from the collection of her late mother-in-law, Princess Diana. Harry gifted the ring to Meghan when they wed in May and Meghan wore the ring to their evening wedding reception.
Earlier in the day, Meghan chose a more colorful Self Portrait dress, in Tongan red, for their arrival to Tonga.
Nadi, Fiji

Meghan chose a pink wrap dress with pom pom details for her second day in Fiji with Prince Harry, where she delivered an address on girls' education at the University of the South Pacific.
Meghan's Frederica Printed Ruffle Dress is described as featuring a "wrap silhouette with a v neckline, long sleeves and asymmetrical ruffle hem." It retails for $1,495 on Moda ‘Operandi, where it is already sold out.
The dress is by fashion line Figue, whose creative director is a French woman, Stephanie von Watzdorf.
Fiji

Meghan dazzled in blue at a state dinner hosted for her and Harry in Fiji.
Her cape gown was designed by Safiyaa, a London-based fashion line founded by Daniela Karnuts.
The Ginkgo Embroidered Cape Dress retails for $2,085 and includes "ginkgo-inspired embroidery" in its original design on Safiyaa's website.
Meghan paired the gown with a stunning pair of borrowed diamond earrings.
Earlier in the day, Meghan wore a cream dress by Australian label Zimmerman and a Stephen Jones hat for her arrival with Harry in Fiji.
She accented the dress with earrings gifted to her by Queen Elizabeth during their first joint engagement in Chester and a bracelet gifted to her by Prince Charles.
Fraser Island

Meghan dressed island casual for a visit with Harry to Fraser Island, located off Australia’s eastern Queensland Coast.
Meghan chose a sleeveless linen dress by U.S. brand Reformation, which focuses on making its clothes from sustainable fabrics. Meghan's “pineapple dress” retails for $218 and is already sold out on the company’s website.
Meghan paired the dress with a pair of $245 sandals by celebrity-favorite footwear designer Sarah Flint.
Anzac Memorial Hyde Park

Meghan chose a black dress by designer Emilia Wickstead for the opening of the Anzac Memorial in Sydney's Hyde Park, to honor Australians who have been killed in conflict.
She paired the dress with a hat by Philip Treacy, a favorite milliner of the royal family.
2018 Invictus Games

Meghan accessorized her official Invictus Games shirt with a white blazer and black jeans as she and Harry attended the first events of the 2018 Games in Sydney.
For the Opening Ceremony of the 2018 Invictus Games at Sydney Opera House, Meghan wore a dress by Stella McCartney, who also designed the gown Meghan wore to her evening wedding reception.
Meghan chose a much more causal look, appropriately, when she and Harry went boarded a boat to watch a sailing event.
She paired black pants and an official Invictus Games windbreaker with a pair of trendy sneakers by French footwear brand Veja.

Meghan went casual in a Martin Grant maxi dress for a visit to Sydney's iconic Bondi Beach with Prince Harry.
The duchess accessorized her dress with wedge shoes but took them off to walk in the sand on the beach.
In choosing the $1,420 dress by Grant, Meghan continued her tradition of dressing in Australian designers during her visit Down Under.
Later in the day, Meghan changed into a pleated two-tone crepe midi dress by Roksanda for a visit to a girls' school.
The Roksanda "Athena" dress retails for $1,850 on Net-a-Porter.
Melbourne, Australia

Meghan continued her tour of diplomatic fashion when she and Prince Harry visited Melbourne.
Meghan wore a navy Dion Lee dress and Martin Grant trench coat, both made by Australian designers.
Dion Lee’s folded sail dress was instantly besieged with online requests, causing the company’s website to crash. The dress, which was a custom-made bespoke dress for Meghan, will reportedly become available later this week.
Later in the day, Meghan changed into a Club Monaco dress and Rothy's flats, which she also wore earlier this week, for a visit to South Melbourne Beach.
Dubbo, Australia

Duchess Meghan showed how friends support friends by wearing a blazer from her pal Serena Williams' fashion line on the second day of the royal tour Down Under.
The blazer is aptly named "Boss" and is from Williams' royal line of her Serena Williams Collection. It retails for $145 and has already sold out.
Williams is a longtime friend of Markle's who attended her wedding to Prince Harry last May. Williams and her husband, Alexis Ohanian, also joined Meghan and Harry at a charity polo match in the U.K. in July.
Meghan paired the blazer with a white button down shirt and black jeans by Outland Denim, an Australian company.
A portion of the sales from the Outland jeans, which are ethically sourced, go toward stopping human trafficking in Cambodia.
Meghan's necklace was made by Australian designer Natalie Martin.
She completed with look with a pair of black ankle boots by U.S. retailer J. Crew that sell for $178.
Sydney, Australia

On the first day of the tour, Meghan chose to honor her late mother-in-law, Princess Diana, by wearing a pair of butterfly earrings and a bracelet that belonged to Diana, who died in 1997.
Meghan chose an Australian designer, Karen Gee, for her first dress of the tour, the "Blessed Dress" that retails for around $1,200. The designer's website crashed just moments after Meghan was first spotted in the white dress, which Meghan paired with a chic trench coat.
Meghan also proved practical in her fashion choices, opting to swap her heels for a pair of Rothy's flats when she and Harry caught a ferry to the Sydney Opera House.
Later in the day, Meghan changed into a $1,895 olive green shirt dress by designer Brandon Maxwell for a welcome reception hosted by Australia's governor general.
Copyright © 2018, ABC Radio. All rights reserved.