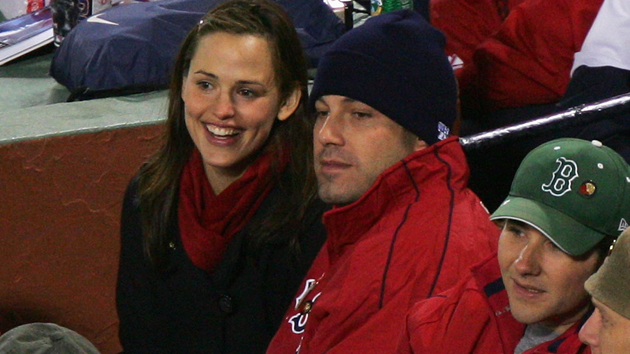 Ezra Shaw/Getty Images(LOS ANGELES) — They may have finalized their divorce earlier this month, but that didn't stop Ben Affleck and Jennifer Garrner from cheering on their beloved Boston Red Sox together at Game Four of the World Series at Los Angeles’ Dodger Stadium on Saturday.

Pictures obtained by People magazine show the former couple — both 46 — sitting near each other in a suite.

They watched the Sox win the game by a score of 9-6, en route to their fourth Series crown in 14 years with a 5-1 victory over the Dodgers on Sunday.

The Red Sox have played a big part in Ben and Jen's relationship over the years — they made their public debut at the 2004 World Series, which the team ended up winning for their first title since 1918.

While they to continue to support each other, Affleck and Garner each reportedly have moved on. Just last week Entertainment Tonight reported that Garner has been dating CaliGroup CEO John Miller.

Affleck and Garner, who finalized their divorce on October 6, continue to co-parent their three children: 12-year-old Violet, nine-year-old Seraphina and six-year-old Samuel.