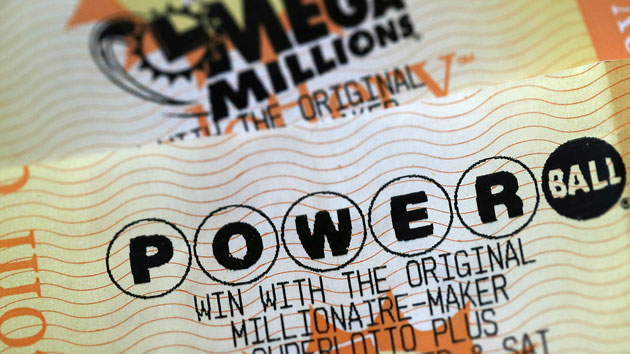 Justin Sullivan/Getty Images(NEW YORK) — Two winners have claimed the third-largest Powerball jackpot in the game's history. Two lucky ticket holders in Iowa and New York have claimed the grand prize.
The winning numbers for the $687.8 million prize were 8-12-13-19-27 and a Powerball of 4.
The cash payout is $396.2 million and each winner will take home $198.1 million in the split jackpot.
The winning ticket in New York was sold at a deli in West Harlem in Manhattan. Iowa plans to announce where the winning ticket was sold later Sunday morning.
There were also $2 million winners in Texas and Florida for matching the five white balls with the added Power Play, and at least nine $1 million winners for matching all five white balls.
Saturday's total was adjusted down slightly from an estimated total of $750 million earlier in the week.
The drawing comes on the heels of a near-record $1.5 billion Mega Millions drawing earlier this week. The jackpot was won by a single ticket in South Carolina.
The largest lotto drawing in U.S. history remains a $1.59 billion Powerball from January 2016. The second-largest ever is this past week's Mega Millions and the third-largest is a $758 million Powerball from August 2017.
The drawing on Saturday is the fourth-largest lotto total ever.
Copyright © 2018, ABC Radio. All rights reserved.