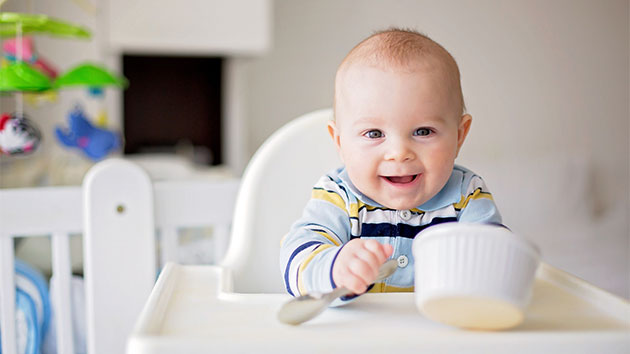 iStock/Thinkstock(NEW YORK) — A North Texas couple is believed to have made medical history as the first couple to deliver a baby they both carried.

Bliss and Ashleigh met six years ago and married in June of 2015. Even before marriage, they had already discussed having children.

During their first year of marriage, their wishful thinking turned into serious research.

"I was very much interested in having children, but Bliss was a little iffy on it," Ashleigh told ABC News.

"I wanted a child that was biologically mine, but I did not want to carry the child," Bliss explained.

Ashleigh described that usually with same-sex couples, "one of them typically births the child and they use the sperm donor."

"The other mom has to adopt the child,” she added.

But both Bliss and Ashleigh wanted a way to be a part of bringing their child into the world.

A friend suggested the couple watch a news clip about Dr. Kathy Doody, a fertility specialist from the C.A.R.E Fertility Clinic in Bedford, and some of her previous work.

Ashleigh and Bliss scheduled a consultation with Doody in 2016 and learned about the possibility of them both carrying the baby using Effortless Reciprocal IVF.

The couple was hopeful they would find a solution to their problem but Ashleigh said she "didn’t really think it was possible until we heard it from Dr. Kathy's mouth."

The two were ecstatic because Doody "sounded very optimistic about it and very positive it could be done."

Doody explained that Effortless IVF itself is not noteworthy but this would be “the first time where both of the mothers physically carried the baby.”

Effortless IVF refers to a form of IVF whereby the eggs and the sperm are introduced in a device called an INVOcell capsule. They are then being placed in a woman's vagina to simulate the conditions in an incubator.

Reciprocal IVF involves the eggs and sperm being incubated in a laboratory by an incubator. An incubator provides a temperate environment and moves gasses and substances, like toxins, away from the embryos.

Since with Effortless IVF, the INVOcell capsule needs to be placed in a woman's body, Bliss was able to have her eggs fertilized and embryos form inside her instead of using an incubator.

Doody said it works because "the woman has kidneys, a liver, and lungs, which allow the body acts as a natural incubator."

Bliss said she was "overwhelmed with joy."

"Knowing that we’re about to create [something] that’s biologically mine," Bliss exclaimed. "My next thought, was what is he going to look like? What is he going to be like? Pretty much like every parent, but I was very excited that this was even possible."

With Ashleigh and Bliss, Doody harvested eggs from Bliss and introduced it to sperm from a donor in the INVOcell. It was then placed in Bliss to allow fertilization and formation of the embryos for five days. The embryos were then removed and frozen until Ashleigh was ready to receive them.

With traditional Effortless IVF, the woman who donates the egg is usually the one that will receive the embryo. But because the egg and embryo came from Bliss and were put in Ashleigh, this makes this case unique.

When asked about carrying the INVOcell, Bliss said that when she saw the device she was worried, but "I didn’t feel it all. I never had any pain from it."

After Ashleigh was done with her hormone treatments, Bliss' embryo was placed in her. Ten days later, on their first try, the couple was pregnant with their first child.

“Bliss always jokes she has golden eggs. She came out of anesthesia and was like, 'Did you get all of the golden eggs?'" Ashleigh joked.

About nine months later, in June of 2018, Stetson was born healthy and without complications at 8 pounds, 4 ounces.

"The moment he was born, I just thought to myself, 'I felt like I was the most blessed person in the whole world’ because he was just perfect in every way," recalled Bliss.

Doody shared that it is a doctor's duty to find more ways to provide IVF care to patients and that Effortless Reciprocal IVF is a great opportunity for some same-sex couples.

"It feels more natural for parents and it gives them a unique bond with their baby,” she said.

Ashleigh definitely felt a closeness because Stetson "grew inside my body." It also gave her the opportunity to share the journey with her wife.

Doody told ABC News that Effortless IVF was developed to provide IVF to people who may not have access to the procedure because of cost and geographic accessibility. It can also be half the price of traditional Reciprocal IVF because it bypasses the need for an incubator.

The Coulters have even been receiving an overwhelming amount of support and questions from other prospective same-sex couples and they are glad they were able to help provide other them with this opportunity.

Since the Coulters, a second same-sex couple in North Texas has gone through the Effortless Reciprocal IVF process at CARE Fertility clinic and delivered a healthy baby girl this September.

Ashley and Bliss are busy being first-time parents and loving every minute of it but the talk of giving Stetson a sibling has come up.

Bliss is content with just one, but "I’m going to talk her into a second one though for sure,” says Ashleigh.

Whatever they decide, the Coulters have two frozen embryos and would not hesitate using Effortless Reciprocal IVF again to give Stetson a brother or sister.

Grampian woman pleads guilty in infant’s death
Epstein’s former house manager testifies, calls Ghislaine Maxwell ‘lady of the house’
Break out the baby oil: Channing Tatum says ‘Magic Mike 3’ will soon be taking the stage
T-Mobile to pay nearly $20 million after outage leads to thousands of 911 calls failing
Pregnant woman shot dead while unloading gifts from her own baby shower in Philadelphia
What we know about Chinese tennis star Peng Shuai as the UN calls for probe into her whereabouts